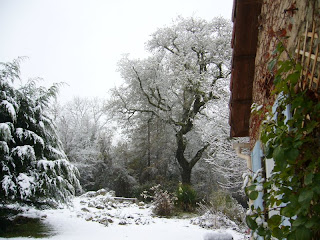 Well, well, well. It's snowing. Now this is a Grillou I haven't seen before. 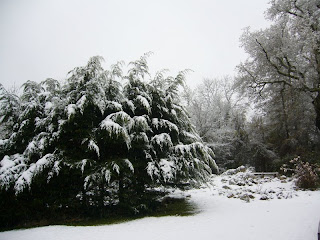 I love snow. It turns me into a big kid with a new toy. It makes me want go out and kick around in it and make snowwomen and throw snowballs. I wish I were a skier, but if you've been reading this blog for a while you'll know all about my legendary skiing prowess (I do want to get some raquettes - snowshoes - this year though). But when we woke up this morning and looked out of the window and saw everything covered in snow - proper snow, I mean, not that horrible wet stuff that disappears as soon as you puff at it - all I really wanted to do was go out and walk in it. I made a valiant attempt to go on working, I really did. But given that today's delectation was the scraping of thirty year old cork tiles from the walls of our downstairs loo, my willpower very soon simply gave up on me. I mean, what can you do when your garden looks like this: 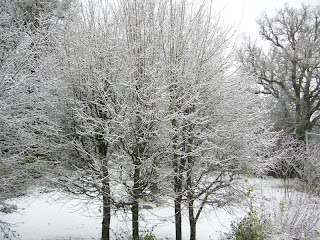 So out we went to walk a bit of the GR78, La Voie du Piémont Pyrénéen, which runs across country just a few minutes walk away from Grillou and is part of the Chemin de St Jacques de Compostelle. While not one of the four major Chemins, it's a superb walk of, in total, around 450 kilometres (140 in Ariège) that runs through the Corbières, the Couserans, the Comminges and the Bigorre regions to join up with the Arles to Oloron-Ste Marie route at St Jean Pied de Port in the Basque country. Phew. (That was for the sentence, not the walk). It's a classic Slow Walk, and definitely destined, I think, to be as much of a guest favourite as it is one of ours. One day, perhaps, we'll do the whole thing instead of piecemeal bits. 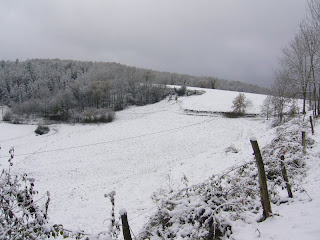 The light was fantastic at times: 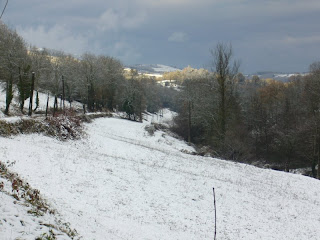 After descending from Grillou into the valley, the chemin climbs gradually back up to around 500 metres and the views open out to the south and west, giving some lovely views (well, usually!) over the high peaks and some nearby hamlets: 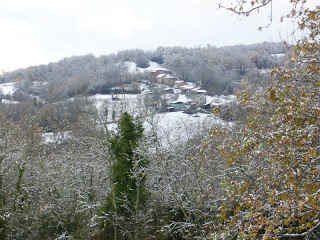 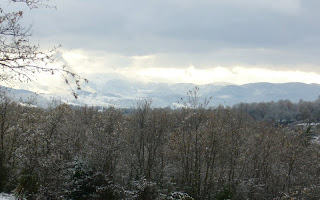 The strange thing is that having walked 3 kilometres or so along the chemin, Grillou is less than a kilometre away (over to the left on the picture above) ... but you can't see it. We've walked the paths and woods all around the house now, and come to the conclusion that Grillou must be one of the only houses that nobody can see, from anywhere ...
On the way back there's a great view of Rimont, our village, in the distance, with the Pyrénées behind (almost hidden in the snowy mist): 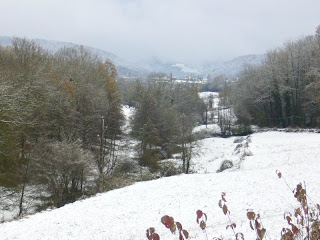 Love the pictures, love the accompanying text. Our part of the Ariège isn't QUITE as snowy yet, but it will be, I think. But please not until we have some heating................