Any of you who knew me in my previous (restaurant owning and food writing) incarnation may perhaps be a little perplexed to find that plumbing appears to have overtaken produce in my affections. Indeed I'm a little perplexed myself. So, on a chilly and dreary Sunday afternoon, with only the songs of the birds to remind me that it's spring, I think it's time to indulge in a bit of unashamed glorification of our local food.

Like much of France, Ariège is blessed with some wonderful local products. To take a trip to Saint Girons market, 20 minutes down the road, on Saturday morning is to be faced with a near paralysing choice of what to bring home: fruits and vegetables, for sure, but also mountain cheeses (from cows, sheep and goats), an endless variety of duck goodies, ham, charcuterie, conserves of all kinds, beans, wine, nuts and nut oils, honey, breads and croustades, millas, donkeys' milk soap ... 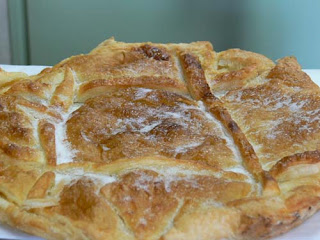 We buy unpasteurised whole milk, yoghurt and crème fraîche from a farm in next-door village Lescure, or sometimes from another farm at Castelnau Durban, next-door in the other direction. Castelnau Durban also has a summer-only echoppe (Gascon for shop, apparently) which sells only Séronais produce and is cooperatively run by the producers. Our third neighbouring village, Clermont, has a bakery which is known far and wide for its croustades. And Rimont itself now has an artisan charcuterie, Le Grenier à Jambons, which raises, butchers and - er - charcutes its own pigs. 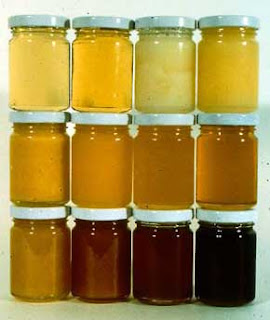 Our most local produce, however, is the organic honey from our neighbouring farm, Saurine. My out-and-out favourite is the acacia: it's an extraordinarily pretty light, clear golden colour and has a very delicate flowery, vanilla-y flavour: great with yoghurt, or on sourdough toast. If, like me, you grew up on Gales, you probably take honey for granted. But it really is an amazing thing, worthy of a little wonderment ...

So what is it, exactly? Well, it's the sugary nectar of flowers gathered, modified and stored in a honeycomb by honeybees. As far as the plant is concerned, the function of nectar is to attract insects, which pick up pollen and transfer it from flower to flower. As the bee swallows the nectar, its saliva splits the sucrose into the two simple sugars, dextrose and fructose. It stores the nectar in a special 'stomach' and takes a little for its own nourishment; the rest is given up when the bee returns to the hive, where it regurgitates it into one of the cells of the honeycomb (don't you wish you didn't know that?). Each honeycomb cell is an incubator for young bees, which feed on the honey as they grow.

Nectar turns into honey by evaporation, and the composition of the honey depends on the type of flowers visited by the bees (which is why different honeys taste so - well, different). Now, you'll like this bit. As each bee returns to the hive it performs a kind of wriggling dance at the entrance. The angle at which it moves shows the direction of flight to the flower in relation to the current position of the sun; the enthusiasm with which it wriggles shows how good a source of nectar it is. That, I promise you, is absolutely true. And so are these three amazing pieces of trivia:

1. The bee is so well designed that it can carry its own bodyweight in nectar (whereas a jet plane is limited to 25%).

2. It's been estimated that the bee is efficient enough to fly nearly seven million kilometres at a steady 12 kilometres an hour on a gallon of nectar.

3. Apparently it takes bees 10 million trips (or 300 bees around one month) to collect the nectar for one jar of honey. It's the females that do most of the work. The males just hang around waiting to mate with the queen. Hmm …
Posted by Kalba Meadows at 16:04

I'm hungry all over again.