So, I'm now a fully-fledged and assessed Level 2 tradeswoman, with the certificates (and cuts, bruises, broken nails and lack of sleep) to prove it; we worked solidly from 8.30am to 6.30pm over 5 days, with 35 minutes or so for lunch and no tea breaks. And we had homework! Tiles have been scribed, cut, shaped into shapes that you wouldn't think tiles would make, nibbled, drilled, trimmed, laid, grouted and then finally, at 6pm on the last day, knocked off again. Rooms have been set out, estimates have been done, borders have been bordered, designs have been designed, mosaics have been sworn at, role plays have been role played, customers have been charmed. We students - seven of us, six Geordie tradesmen and me - have imbibed more information than we thought our brains and bodies were capable of taking in in such a short time. My language has become a little - er - richer ... even if it did take me a while to understand what the guys were saying, such was the depth of their accents and dialect. And I've laughed so much that I've only just stopped aching; I don't know what it is about Geordie humour but it felt like being on the set of Auf Wiedersehn Pet. Only funnier. I'm still missing it (and them) all, a bit.

This is the place that became home for over 50 hours: 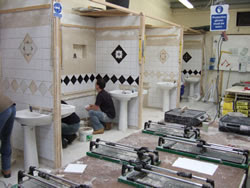 And this was halfway through one of my bathroom projects. Not exactly my style, but a bit of a challenge: each one of those bits of tile in the panel had to be designed and cut to shape individually ... 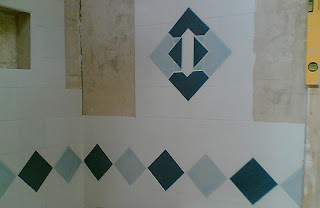 I even developed a bit of a soft(ish) spot for South Shields, which struck me as the kind of place that doesn't have a lot of money but nevertheless tries hard to make life pleasant for those who live or go there: the Marine Parks, for instance, were beautifully kept, and I passed the street sweeper every morning; and there seems to be a relatively high level of solidarité, or community support. My guest house, the Seacrest, couldn't have been better nor its owner kinder, and I enjoyed waking up every morning to a view of the sun rising over the sea and the sound of seagulls.

I wondered what it would be like to be back in the UK after well over two years absence: would I slip back into a comfortable duvet of familiarity? Would I wish I'd never left or, a bit like a friend who after a recent trip back to England experienced - to her great surprise and against her better judgment - a bizarre attack of 'home' sickness? Well, actually, no. I had a great time, but after 10 days or so I was reaching my limit. The constant concrete, traffic, over-peopled-ness, manic-ness and general level of nervous energy that surrounded me everywhere I went was beginning to get to me. I was upset by the daily amount of rubbish produced everywhere, by so many bags in so many trees, and by not being allowed to leave Tesco's without putting my two items in one of their plastic bags. I was upset by the sheer volume at which so many people spoke in restaurants. I was upset by the fact that 75% of city dwellers seem to have been genetically modified so as to be unable to walk, or have a coffee with a friend, without talking to someone on their mobile phone. All these things I had forgotten, but to tell the truth I felt a bit like a fish out of water. Being back at Grillou, with the mountains down the road and the silence all around me, is just bliss. Even if it is drizzly, and cold, and not at all spring like.

And I heard the first cuckoo this evening, so all is well.
Posted by Kalba Meadows at 21:42