When we arrived at Grillou two years ago, like most house buyers here we inherited a lot of Stuff, in our case mostly wood of one sort or another (oh, and a pony). Mounds of it, here, there and everywhere: wood for burning, wood for making steps and structures in the garden, old beams, old oak floorboards stashed away in the porcherie, bits of cut down trees, slices of oak tree 6 centimetres thick ... and then there was the chestnut.
The chestnut was obviously Important. It had a mention on the inventory that came attached to our buying contract, and was valued at 400 euros. It had been used by our predecessors as volige in the part of the barn roof that had already been relaid, and we assumed that we'd use the rest of it to finish the job. The Perfectionist, however, had other ideas: "Merde alors, you can't use it for that!" he spluttered. Or words to that effect. And set out to find a hundred and one other places where it could be mis en valeur, as they say here - a wonderful expression which translates roughly to showing it off to its best advantage.
Reader, he was right. It pains me to say so, but he (nearly) always is. Don't you just hate people who are right (nearly) as often as you are? Anyway, moving swiftly on ... what looked like a fairly unpromising, if large, pile has so far metamorphosed into, amongst other things, window sills, cladding for walls and cupboards, and skirting boards. 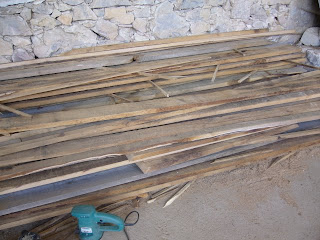 Part of the original pile. Not exactly promising, huh?
And Pink Van Man has revealed himself to be a bit of a woodworker, on the quiet. Well, not so quiet, actually, given that Grillou has been echoing with the sound of circular saws, planers and sanders of all description over the last fortnight or so. But he has a real feel for wood, and loves working with it. I do too, and for the last few days we've had a bit of a wood conveyor belt going on: he's been cutting, scribing and machine sanding the skirting boards, then passing them to me in my makeshift atelier (the garage) where I've been hand finishing and then oiling them with linseed oil - six coats so far and counting ... 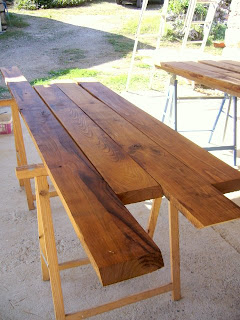 In the atelier ...
Do you remember those magic colouring books that were all the rage hundreds of years ago, when I was nobbut a kid? You 'painted' the page with water, and a picture in different colours appeared, by magic. Well, oiling chestnut that's been really well weathered and then sanded is a bit like that; as soon as you wipe the oil onto the wood, the most amazing grain patterns appear, as if from nowhere. And it's the most beautiful, rich wood, too ... 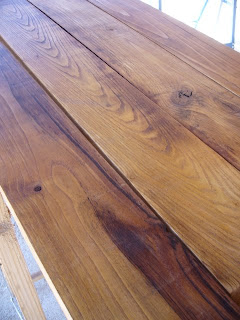 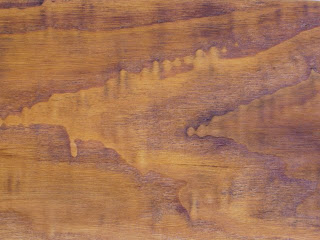 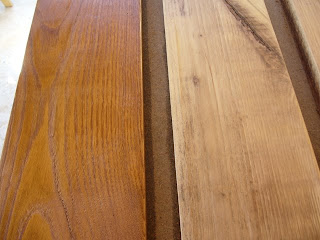 After oiling, and before
Now that sure as hell beats digging out hard core ...
Posted by Kalba Meadows at 19:06