Above all don't wobble

What do you do when there's not enough of you to go round?
project manager accountant cook therapist designer tiler gardener marketing manager sander personal shopper quantity surveyor budget bod decorator webmaster furniture restorer purchaser cleaner upper special effects coordinator networker hacker outer (infrequent) blogger .....
I'm plate spinning. And the last few weeks have been a bit difficult, to be honest. As usual at this kind of point in this kind of project, everything needs doing/buying/deciding at once: x can't be done until I've done y, y can't be done until I've sourced w, w can't be sourced until p has been done. And so on, ad infinitum. Each day begins, and ends, with a juggling of priorities, in a vain attempt to fit in with the needs of The Perfectionist's work, my work, and the bigger long term needs of the project itself. It's a bit like trying to cut a path with a machete through a jungle of competing demands; inevitably compromises have to be made, and nobody gets everything they want. At the same time, Life has to go on: eating, sleeping, washing clothes, dealing with potager gluts, maintaining something of a clear space to live in. Emails and blogs get written at midnight, other work gets fitted in somewhere between midnight and morning. Time with friends, out walking, in the garden ... mañana.
But.
Real progress is being made, day after day. What was just a twinkle in my eye (and on my plans) has been given shape, and life, and it works. A new timetable has been thrashed out with The Perfectionist for the last stage of the project, which gives us a bit more space - two whole months, in fact - to finish our work in the guest accommodation before he starts knocking a big hole in the library to connect it, finally, to the main house hallway.
We've started the finitions in L'Atelier d'Artiste: I'm ankle deep in tadelakt, paint, natural pigments, linseed oil, lime wash, tiles. Colours are appearing; the place is becoming a home.
I'm beginning to dare to believe that we might make our target of being ready to open by late spring next year.
Three peoples' shared hysteria about toomanythingstodoandnotenoughtime is often hysterically funny.
The potager seems to have thrived on the neglect we've thrown at it this year and has thrown more food at us than we've had any right to expect: there are kilos and kilos of sugo di tomate in the freezer and still 11 aubergines on the plants, we could open a shop to sell all the chilli peppers that we're getting, we're already eating parsnips and cavalo nero, we have 24 potimarron stored away for the winter and the same number of beetroot in the ground. Plus there's my pasteque - water melon; my first ever. I've grown it to make jam, a speciality of southern France. But I'm so attached to its round perfection that it hasn't so far graduated beyond its role as table decoration. (You think that's weird? When I was a girl, I could never, ever bring myself to eat chocolate rabbits, or bears, or ducks. Still can't, since you ask ...). 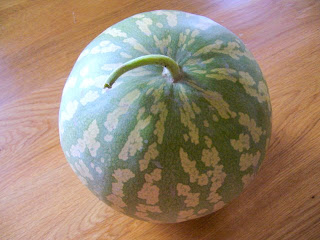 And then there's the weather. Summer here is just going on and on this year; today was hot (29 in the shade) and immaculate, with awesome clear golden light. Tonight we've eaten outside, in tee shirts.
And at the end of this week The Perfectionist is going to teach me to plaster. Can life really get any better?
Posted by Kalba Meadows at 01:03