Some eighteen months ago I blogged, in passing really, about our local lake, the Lac de Mondély. Now much as I love it, it's hardly a world class tourist attraction - it's a small, homespun, local lake mainly used by local people and all the better for it. For some reason presumably best known to themselves, my blog article immediately hit Google's first page, where it has resolutely stayed ever since, ahead of all the 'official' tourist sites, and bizarrely nearly half of all the casual visitors to this blog now come as a result of searching for Lac Mondély!

But while that's all very pleasing and flattering and all that, it's hardly superstar status. Last Sunday, however, the UK Sunday Times ran an article entitled The 20 hottest European beaches for 2010. Lac Mondély was - are you ready for this? - placed number two, behind Page Conguel in Brittany and just ahead of Collioure (which is listed as being 'best for highbrow holiday makers', whoever they may be, and actually barely has a beach at all ...). Look, if you're one of the 561 people who've visited this blog in the last three days just to read about Lac Mondély, I need to explain something to you. Mondély is in the Ariège (something that the writer strangely failed to mention). Ariège is in the Pyrénées, which are mountains. It's almost as far south as you can go and still be in France, green, wild, small, sparsely populated, rugged and incredibly beautiful, but it's not The Beach. To get to Mondély you have to schlep along a rutted one track road for half an hour and hope you've still got your exhaust when you get there. Actually, come to think of it you have to do quite a lot of that anywhere in the Ariège.

Don't get me wrong; I'm truly delighted you're all interested in our wonderful département, and if you're moved to come and explore it for yourself so much the better (yes, well, clearly I would say that, wouldn't I ...?). But I'm just having ever-so-slight flashbacks to the days in our small village in north Norfolk when it was just beginning to become a bit Sunday-supplement-ish cool, and when people would stop me as they swayed precariously down our cobbled loke in kitten heels to ask where the town centre was. (Er - you're in it ...).

However. While Lac Mondély is definitely not Europe's hottest beach holiday for 2010 (unless you happen to earn your living writing for the Sunday Times) it's still pretty special. Don't you think? 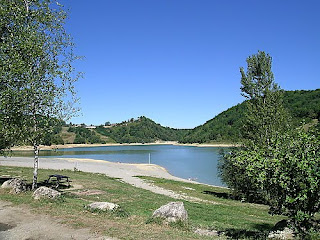 In Oregon (USA), we'd call that lovely little lake a pond... or a swimming hole!