One man and his hole 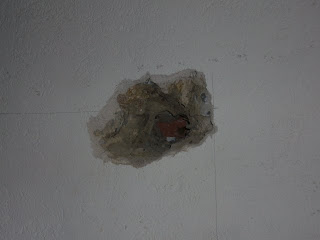 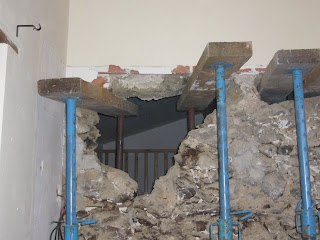 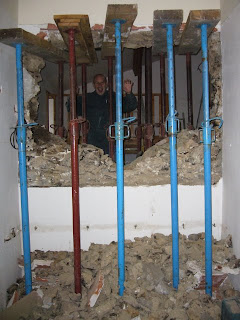 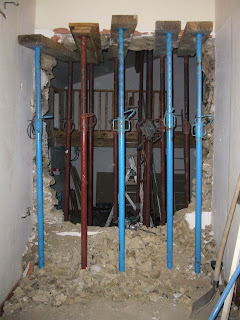 It might not be apparent from the photos, but this is a solid stone wall, well over half a metre thick; it was once an outside wall, and some of the stones are as wide as I am - too heavy to lift, and so have to be cut up with an angle grinder ...

It might (does!) feel like sheer madness right now, but we've all been waiting for this moment since the start of the work: this is where we finally connect the two parts of the house that up to now have been separate, with the only access from one to the other through a circuitous route that takes you via the cellar. The last two days have been a truly superhuman effort on the part of The Perfectionist, who's working largely on his own while we clear rubble, fetch, carry, make coffee, admire, and generally sympathise. (True, we do have him shut into the room behind the acro props, thus forcing him to hack his way out, but he doesn't mind. No, really, he doesn't ...).

It's a bit of a strange voyage of discovery: today, for instance, we started to uncover a whole load of stones and filling that were distinctly burnt. Was there a chimney? No other evidence of one. Was there once a fire? Was the room once a forge, maybe? Unlikely - we've been told by two elderly sisters who grew up in the house that it was always an animal shed - goats, in fact. Was it used to smoke charcuterie, perhaps? We may never know for sure. And yesterday afternoon The P (who is not given to hysteria, even when shut into an old goat shed) reported seeing, out of the corner of his eye, a series of vague, shadowy figures passing in front of the hole ... and, well, let me put it this way - it was neither John nor me, and there was nobody else here ...
Posted by Kalba Meadows at 22:46