There but for the grace of Gaia ...

The winds and hurricane of Saturday night passed by and left us completely unscathed. In fact we bathed in ridiculously high Foehn effect temperatures (it was 25 degrees at 10.30pm), and enjoyed a truly spectacular flare at sunset: 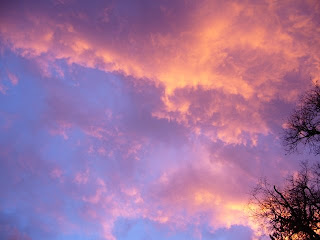 Other areas weren't so lucky. Like the rest of France, we've been watching, with a mixture of horror and disbelief, the daily TV coverage of the floods in Vendée, where 28 people have died in the communes of L'Aiguillon sur Mer and La-Faute-sur-Mer alone, surprised in their beds by the storm surge that devastated the walls built to keep the sea away from the huge bungaloid estates that have sprung up over the last 20 years. At least 10 per cent of all the agricultural land in neighbouring Charente Maritime has been invaded by the sea; the Ile de Ré (where 'only' two people died) has been split by the sea into its original three islands, and entire villages are still cut off.

This stretch of coastline is remarkably similar to that of north Norfolk, where we lived for 8 years before coming to France. Our house was barely 2 centimetres above sea level and a few metres away from hectares of salt marsh; like the rest of our street we were front line in the flood zone, and our house was one of many that had been flooded to nearly three metres high in 1953 (over 50 years later, salts were still coming out of the wall and so like our neighbours' houses, all our inside walls remained boarded). Although a new (and ugly) concrete sea defence had been built between us and the marshes, we remained at risk; the local council regularly delivered sandbags, our flood board was always at the ready, the flood warning siren was tested without fail on the first Saturday of the month, and we would get occasional phone calls from the Environment Agency requiring us to get "ourselves and our livestock" to higher ground. In the back of our minds was always the question: what should I save? It was somewhat discomforting; we all knew that one day another huge surge would come. And so it will, of that I have no doubt.

Probably because of that experience, I find myself being particularly affected by the flooding in Vendée. What I see every night on my TV screen is what we all, at an almost unconscious level, feared in Cley in our everyday lives. And yet there are some huge differences. The early warning system in north Norfolk is well developed, if not especially well thought out (many of the phone alerts, for example, came in the form of voicemail messages in the early hours of the morning ...), but there seems to be no warning system at all in place in the Vendée and Charente Maritime in spite of the fact that huge swathes of the land has been reclaimed from the sea and lies at - or below - sea level. Last night I listened to the President of the Conseil Général explaining how the flooding "could not possibly have been foreseen" because it was a result of a combination of events which had never happened before: high winds, spring tides, and an atmospheric depression that caused a further increase in the height of the tide. Er - yes ... that's exactly what happened in the floods of 1953 ...

It seems that many of the sea walls date back to the Napoleonic era when the land was first reclaimed from the sea, and have been slowly falling into a state of disrepair. Even more disturbing, though, is the number of homes that have been built in flood zones - and I'm talking at, and below, sea level - since 1999, the year of the two successive hurricanes that caused untold damage to much of France: 100,000. Many of these are, like those on the estate at L'Aiguillon, single storey 'pavillons' (in fact at L'Aiguillon, two storey houses are not permitted ...). There are, of course, huge incentives to classify land, however unsuitable, as constructible, and it's well known that many a town or village maire has done very nicely thank you over the years by doing just that. Rightly, the merde has begun to hit the ventilateur about all of that today, and hopefully we may find that this particular stable door is, if not shut, now pushed a little further closed.

Fat lot of good that'll be though to those who discovered, one Saturday night in February, that while you can build walls and banks and barriers and defences of all kinds, Gaia will, one day, have her way.
Posted by Kalba Meadows at 23:24