Butterflies and other animals

In true capricious 2010 fashion, the weather has this week finally caught up with the fact that it's summer and has been teetering on the brink of a full-blown canicule, with shade temperatures hitting the upper thirties and staying there until well after dark. Maybe not the best for heavy outside work, but pretty nice nevertheless (and there's always a worthy substitute, like lounging around on a sun bed with a book. Oh, all right then - like getting on with the inside work ...). The loveliest thing about it though has been the absolute explosion in the butterfly population that we've seen over the last few days.

Ariège is well known for its butterflies, and living here, up at 500 metres in the woods, we seem to get more than our fair share. To be honest, I wish I was better at identifying them - I know of people who are perfectly well able to point at something 50 metres away and name it as a Small Pink-Spotted One-Legged Maui Dancer Thrice Removed, but I'm not (yet) one of them. Having said that, I've got to know the more common (in Ariège terms, that is) ones over the last couple of years. What follows is a quick-and-dirty list of the ones I've seen flying around Grillou over the last 48 hours, partly so that I can show off my new found skills, but mostly so that (shameless plug number 73/10) you can see just how rich nature is here in our little woodland clearing:

This is the Scarce Swallowtail, one of my favourites: 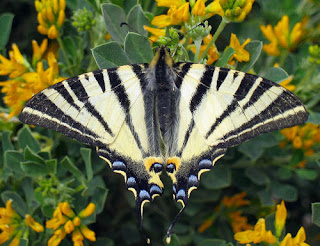 And this: not a butterfly, and not a hummingbird (though it sounds like one) ... 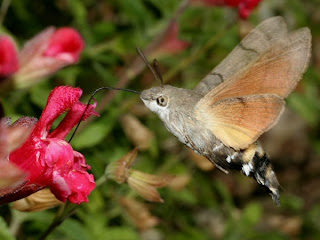 It's a Humming Bird Hawk Moth, with the coolest proboscis on the planet.

And while I'm at it, I can't resist this picture of the only bird I know that speaks its name: the upupa epops (hoopoe). This one has taken up residence just down our track, from where it spends its day yelling 'oop-oop-oop' (or 'poo-poo-poo' as my French bird book would have it) at anyone who'll listen ... and it's hard not to. Just recently it's taken to walking in front of my car as I come home from work, and after we've travelled the requisite 100 metres together it always flies up to the same branch to let me pass ... 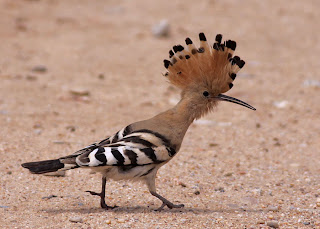 Aren't they just ridiculously wonderful?
Posted by Kalba Meadows at 23:37

Great post. We, over here rather nearer the Aude have seen fewer butterfies this season. But I envy you your hoopoe- we've only seen them in Valencia, though my ex-mum-in-law used to have them in Glastonbury (well, they would go there, wouldn't they?) And the humming bird hawk moths - well, what a wonderful picture. Did you take it? I've had no luck with them at all. They won't sit still

Wish I had - taken the picture, that is. No, it's a 'stock' photo, I'm afraid. But you've got lots of hoopoes over your way, you know - try walking round Montbel from the not-Léran side ... though this one, it has to be said, is especially tame.

What a beautiful bird. I searched and they are not in North America. I did find a video clip and could actually hear the call it makes. The link I found is here: http://ibc.lynxeds.com/video/hoopoe-upupa-epops/adult-singing
We have a great website from Cornell University Orinthology Dept. where we can look up N. Amer. birds and hear their songs.

They're great, aren't they Sandee? One of my other favourites is the Golden Oriole - do you have those in the States? They're almost impossible to see, but have an unmistakeable call ...

We have what is called a Bullock's Oriole. It is beautiful. Black cap, eye mask, shoulders and upper wings then white on the wings. The rest of the body is a pretty golden pumpkin color.