A frite on my shoulder

Yesterday I did something that I would never, in a million years, have imagined myself doing. (Yes, I will tell you what it was. But you'll have to read on ....).

Rewind - ahem - several years. Let me just say that whereas my mother may have had many good qualities, cooking was not among them. We subsisted largely on a diet of tough grey meat, soggy potatoes, greens that managed to be grey, tough and soggy at the same time, and convenience foods. It was so bad that I thought school dinners were gourmet extravaganzas; my dad, meanwhile, got his fix of food with taste by lunching every day at various Italian, Bangladeshi and Caribbean greasy spoons in London's East End. What we never had at home was anything deep-fried. Deep-fried food was deemed to be - how can I put it? - a bit common (probably a small mercy given that mum would almost certainly have set fire to the kitchen). Visiting the fish and chip shop was acceptable - once - whilst on holiday; otherwise, never.

I first encountered proper frites while working as a student in a hotel in the Swiss Alps. Every morning M. le Patron would cut - by hand - a veritable Alp of chips; he'd blanch them in boiling water, then dry and chill them before frying them at a low temperature for five minutes or so. After that they'd be drained and refrigerated, to await the lunch service when they'd be cooked again, to order, at a high temperature. They were fantastic - soft and fluffy on the inside, crisp and golden on the outside. No wonder diners came from far and wide to eat them.

A few years later my then partner had a habit of cooking up pans of late-night chips in the house we shared with our somewhat outrageous friends Bob and Mike. The house would miraculously fill up with Acton's weird and wonderful, who would stay until the early hours while John (that one, not this one) would produce bowl after bowl of frites to accompany the endless bottles of bad wine we drank while sewing women's knickers (don't ask). I was much too terrified to go anywhere near the kitchen, the idea of a saucepan full of boiling oil  - we had no mod cons like chip baskets - on a gas hob being just t o o o o far outside my comfort zone. And then with the end of that relationship came the end of my eating frites maison for 20 odd years ...

... until last night. Because what I did yesterday was ... buy a deep fryer.

It's posh. It's from Lidl. That is not a contradiction in terms. So before you - as I would have done until recently - pour scorn on my choice of shop, let me tell you that in the last couple of years I've bought from Lidl (amongst other things): an orbital sander and a detail sander, both of which clearly come out of the Bosch factory; an espresso machine that is indistinguishable from the Moulinex model; an SDS drill of indeterminate provenance but as functional and robust as anything you could find; plus various kettles, toasters, kitchen scales, bagless vacuum cleaners, hand blenders, parasols, garden chairs and other stuff, all at around a third of the price of proper 'branded' goods and all with a three year warranty. Still laughing?

I bought it with fantasies of making panisse and briks and courgette flower fritters and tempura and churros and felafel and pakora and bhajis and accras de morue and puris and whitebait et al. And I shall. But last night there was only one thing to cook. 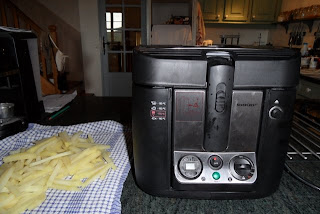 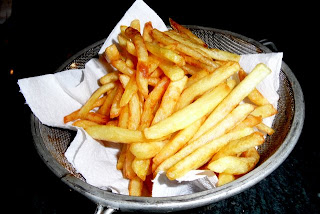 Frites, M. le Patron style. And oh my god, they were good.
Posted by Kalba Meadows at 21:58

You're ahead of me by about six months. Please describe exactly how you make your frites (with blanching times, etc.). I've been browsing the deep fryer section of several stores lately. The method that you describe for making "french fries" is the one found in most gourmet cookbooks that I have seen.

Glad to hear I'm ahead of someone, Bloggerboy! New post coming up tonight with complete description (too long I think to add it as a comment ...)