Over the last month we've continued to enjoy extraordinary autumn weather here at Grillou: 160 hours of sunshine - over a third up on the average - and only three days where the sun didn't put in an appearance, along with balmy temperatures often in up the twenties. It's not unusual, at this time of year in particular, for the Pyrénées and their foothills to have much warmer and clearer weather than the rest of south west France, including the Med, and for Ariège to be leading the way temperature-wise. But looking at the weather stats for the last fifty years or so and talking to local people, it seems as though the pattern here is shifting quite noticeably towards warmer/dryer. Which if it continues (and the forecast is for just that: I've been looking at Metéo France's long term predictions for 2050 and 2090 and even the most conservative scenario gives us an increase in the average temperature of 3.5 degrees by 2070) is going to have huge repercussions on all sorts of aspects of life - and wildlife - here.

We're seeing that on a micro-scale here at Grillou. During the last month we've had great tits and blackbirds singing at full pelt; butterflies still swarming round the buddleia; marigolds, geraniums and nasturtiums still in flower; spring primulas bursting into flower too. At the end of October we planted several tiny bare root rose bushes: already, they've all put out huge numbers of shoots and leaves; some our established rose bushes have bloomed again in their fourth flush of the year. The yucca plant has flowered. We're still eating tomatoes and basil from the potager. Some of the birds that normally migrate - our blackcaps, for example - have stayed put. Our several-hundred-year old oak trees are showing signs of stress. 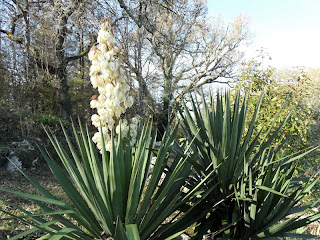 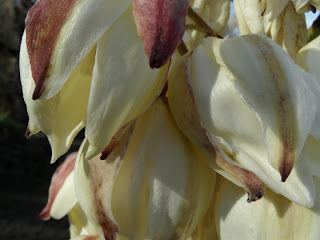 And ... the violets are coming out. Normally we'd expect them at the end of February. But yesterday - the first day of December - we had a small carpet of them. Hmm. 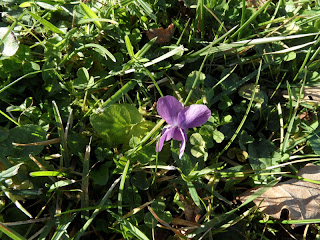