Sharing lunch with a swallowtail

We've just shared our lunch terrace with the first of this year's swallowtail butterflies, who's spent the best part of the last hour snacking on the nectar from the dianthus in the flower bed around the edge (in fact I think he's - she's? - still there). 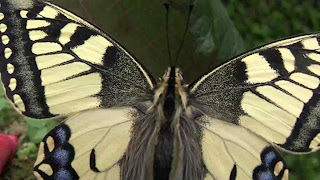 Although swallowtails are not uncommon here, and you'll almost certainly see at least one if you're here, it's still a Big Event for us. In the UK, swallowtails are now confined to very small areas of Norfolk, the county where we used to live, and we like lots of others used to make annual pilgrimages to those places - sometimes just a few metres square - where they could be seen. So to have one casually join us for lunch is a huge thrill ... 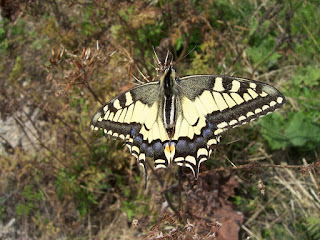 I was a bit confused by this one when I first saw it, because its markings seemed to be rather different from those I'd seen before. But my learned guide book told me that there's a distinct difference between the first brood, which flies round about now, and the second, which flies from July to August or September: the purply-blue markings are a lot less evident, the red spots almost non-existent, and the yellow and black of the wings are much more pronounced. 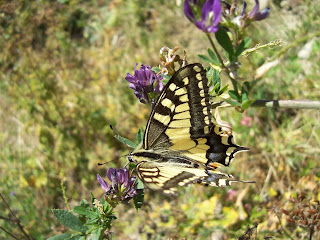 I wish I could say that these photos were mine, but I haven't yet found a way to persuade them (the swallowtails, that is, not the photos) to stop fluttering long enough and pose nicely for the camera. So thanks to the RSPB and to this site, which so often comes up trumps with some lovely pics!

What an experience! They are beautiful. I don't believe we have them in our area but I awe at the Monarch Butterflies that we do have fluttering around our lavender plants.

They are beautiful, indeed, Sandee. I think they're probably my favourite butterflies.

Actually, I think you DO get swallowtails over your way - at least according to a quick search I just did which showed several varieties in Oregon, including the Western Tiger Swallowtail who is just gorgeous! They all have Latin names beginning with Papilio so if you've got a reference book it might be worth having a look ...

Oh, we haven't had any yet this year over at our end, but they seem to be abundant once they do turn up. Lucky you. And I'm glad the photos aren't yours. I was seething with jealousy till I read your last paragraph

I'm not sure I remember having first-brooders here before, though presumably we must have done. We do get a lot of second-brooders from July onwards.

I did hover around this one with the camera for a good while, but I'd have needed the tripod and it all seemed too complicated (really I just wanted to watch the butterfly!).