Over more years than I can believe of providing breakfasts for guests from all over Europe (and now all over the world), I've learned that there are two sorts of jam that will always fly out of the pot almost faster than I can make them: one is strawberry, the other apricot. Sometimes, here, you'll find on the markets little pots of home-made but ponced up jams such as strawberry and mint, or apricot, lemongrass, rum and cardamom (?!), which to be honest are not really ma tasse du thé: I just want to taste fruit, big fruit and more fruit. So with a few exceptions (like courgette, which on its own is pretty boring ...) I don't add anything to my jams except sugar. 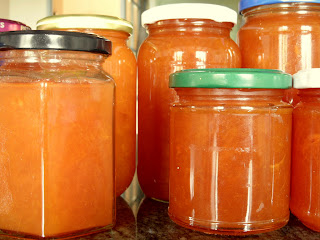 My own very most favouritest jam in the universe is apricot. I adore everything about it it: the tartness, the colour, the smell, the flavour, and at this time of year I'm like a excited hunting dog who can sense in the air the approach of the hunting season. And so when in my usual greengrocer's yesterday I spied a bunch of elderly women in flowery pinafores all jostling round some crates right at the back in the corner I knew straight away what they were up to: apricots! In spite of not wearing the trademark apron and slippers I made a beeline for their corner, and sure enough there they were: an 'arrivage' of 5 kilo crates of the biggest apricots I've ever seen - the size of small peaches, in fact - from Trouillas, in the neighbouring department of Pyrénées-Orientales where we reckon the best apricots come from. They were Pinkcots, one of the earliest varieties and a new one to me, but they tasted good, and anyway all those pinafores can't be wrong ..... so having indulged in the obligatory nods, half smiles, tastings and finally conversations, I was eventually permitted to join their number and appropriate a crate. 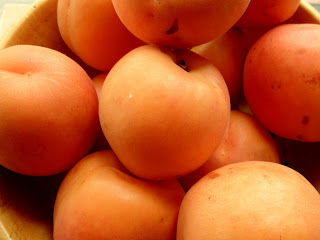 In my never-ending quest for flavour, I've fiddled and farted around with my methods over the last few years and now make jam quite differently from how I used to do it in England. My aim is to cook the fruit for as short a time as I can get away with, so I start by macerating it with the sugar overnight; that means I'm starting off with the sugar already liquified which cuts precious minutes off the cooking time.

Then there's the sugar. We can't buy pectin here, so I use this ... 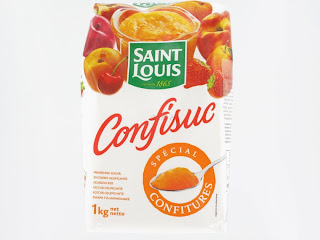 ... special jam making sugar which dissolves easily and has natural pectin added to it, which means no need to add lemon juice and adulterate the flavour of the fruit.

And then there's the thorny question of when it's done. I much prefer the French set, which is a lot lighter than the more typical stand-your-spoon-up-in-it English one, and so these days I tend to stop as soon as the jam hits 103°C (sometimes even 102°) instead of boiling it for 5 minutes at 104° as so many UK recipes would have you do. But mostly I do it by ear, by feel and and by eye: when it's ready the bubbling sound changes timbre, the spoon drags ever-so-slightly more in the fruit, and when I flip a little bit onto the granite worktop and wobble it with my finger it feels like jam. At that point I do the fridge test: I take the pan off the heat, put a teaspoon of the jam onto a cold saucer and stick it into the fridge for 5 minutes. If after that it's clearly jam, we're there. (Some books will tell you to look for wrinkles, to which I'd say 'yes, but ... too much wrinkle, too solid a set'. If that happens, no worries: add a little fruit juice to the pan, bring it back up to temperature and test again). And that's it. Whole batch done and dusted in 12 minutes. 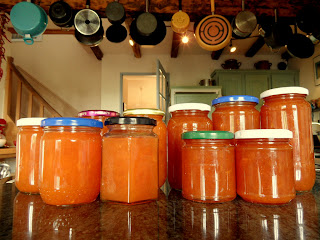 It'll be on the breakfast table, along with several other flavours, tomorrow ....

PS  Oups - I nearly forgot to mention the free froth! As the fruit and sugar mixture comes up to the boil, it froths up like mad and threatens to invade the kitchen like something out of a sci-fi novel. All the books will tell you to scoop it out and discard it. I don't. Or rather, I do scoop it out, but I never discard it. I let it sit for a while; it'll separate into a light foam at the top and a syrup at the bottom. I pour the syrup into some glasses, add a little Amaretto, then mix the froth into some crème fraîche or whipped cream and spoon it over. Et voilà ... free dessert. It's a bit like a mousse or syllabub, and quite, quite delicious.
Posted by Kalba Meadows at 14:40

Sounds delicious!! Last year we had masses of apricots but we ate them long before we thought of making jam! After the hard frosts late this year we're not getting much of any fruit. Your recipe has put me in the mood though ...may have to seek out those pinafores..!!

Well hello - how nice to see you here! I wish we could grow apricots but we're really just too high (500m) to be very successful - though we're building up nicely to another plum glut next month ... Have fun with the jam pan. It's really quite addictive ...

I agree with you on soft set - much nicer for breakfast. I've just made a batch of rhubarb ( and yes straight rhubarb - no ginger, or whisky, or spices) using similar method although I leave mine overnight in orange juice. Now the strawberry season has just started I'm hoping for a few jars from that! If you don't want to do exotic things with the foam, stirring in a knob of unsalted butter never fails!

Oh, lucky you - our main strawberry season has finished, though there will be some around for a few weeks yet. Mind you, I have a feeling that I'm going to be making more apricot jam yet ... a good two thirds of a jar went this morning at breakfast! And yes, I do the butter thing too to 'settle' any remaining bits of foam - works a treat, though I don't pretend to understand how!

I'm with you on the deliciousness of apricot jam: thanks for the recipe hints. But I've still not met anyone except my son-in-law who can be doing with strawberry jam. Why is it so popular? Even home-made, it's just sweet gloop. And I'm glad I'm not the only one who doesn't waste the foam: delicious with yoghourt - and your ideas sound great too.

Yes you have. You've met me :) I love strawberry jam too. And so do all our guests, who are eating me out of house and jam!

I might have known though that you of all people would never waste the foam!

Just to say don't like anyones strawberry jam but mine! And only on scones with double cream!

Is that a strawberry jam challenge, Sharon? :)

Oooh Kalba! Jam wars - is this what it's like in the W.I? Preserving pans at dawn!

LOL! And then we could get started on scones, because I don't like anybody else's scones but mine :)

Not to mention Victoria sponges!!!

And (not very WI, I think, but still) brownies. Yukky cake-like ones instead of my lovely sticky molten fudgy ones :)

I followed your suggestions about leaving the fruit in the sugar for a few hours: good idea! The only thing I changed was to add just a few blanched apricot kernels - very few - to the jam as it cooks to give a faintly almondy note to the proceedings.

Yes, that's a nice thing to do. I used to do the same, but have stopped, for some reason. And I suspect I won't resume - not sure it improved the jam enough to warrant cracking all those kernels (in other words, the ends didn't justify the means - got to be a bit hard-nosed these days - it's amazing how much jam four people can get through in a week!).