But our grounds and our plants aren't. If they had blood pressure, it would be through the roof.

For the last couple of weeks we've had temperatures of 36 degrees or so most days (and for the last week they've not dropped below 22 at night); this month so far we've had just 2 hours of rain, all at once. And this year, our rainfall is running at between a half and two thirds of what was once considered 'normal'. Same thing last year. Compared to what friends in Spain have experienced so far this year, it may not be much to write home about.
But ...

... this is the Pyrenees. The ecosystems here have developed in response to a certain climate - if you look at detailed meteorological  maps, Grillou sits almost exactly on the borderline between Mediterranean and Atlantic climatic influences, giving us a healthy mixture of hot sun, clear unpolluted air, gentle breezes and enough rain to keep Ariège that amazing green colour that so struck us when we first came here one September many moons ago. When we started to look for the place to live, we discovered that once you went over the border into Aude the summer greens turned to browns and quickly found that our hearts were here, with the best of both worlds.

Now, as Bob Dylan, said, the times they are a'changin'. This is our lawn field today: 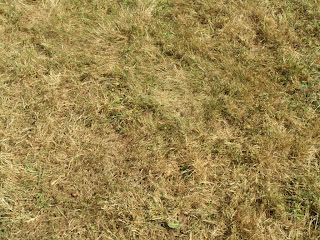 Trees are shedding their leaves as if it were November: 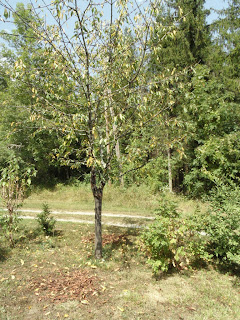 Lots of shrubs - the same shrubs that have struggled to re-establish themselves after the Big Freeze in February, when we had temperatures of minus 18 or lower for 2 weeks - are doing the same: 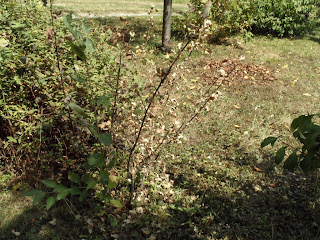 Who have thought that I'd have to spend half of yesterday raking up leaves? 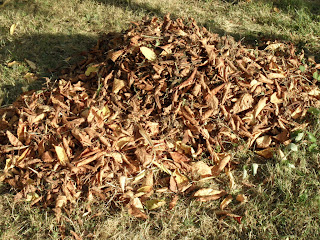 The several-hundred-year old oaks that stand guard over our land are seriously stressed out, and we quite literally fear for their lives if we're now seeing the beginning of a new and very different pattern of extreme climatic conditions. And here's a sad sight: one of our wild cherry trees completely uprooted itself a couple of days ago and is now leaning at a precarious angle - the ground is so dry that the entire root ball has upended. The only question now is do we let it fall, or cut it down? 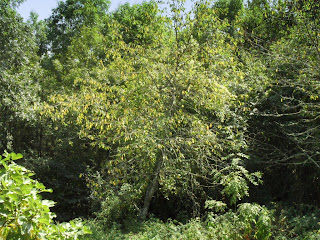 It's the same story in the woods around us, and we're acutely aware of how tinder-dry everything is - one stray spark could start a wildfire which would spread like - well, wildfire. We've not quite banned barbecues yet, but we do make sure that everyone who's using one has several buckets of water to hand ...

Our stocks of rainwater ran out a long time ago so we're having to resort to the hose to keep things alive, like the multitude of colourful pots that greet you on arrival: 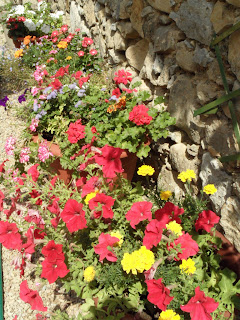 And the roses, which by now should be preparing for their second flush: 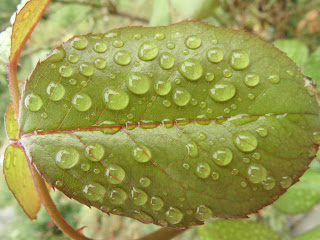 The good news is that we're having a fantastic crop of tomatoes that taste as though they've been grown in a hot Provencal climate. And then there are these - would you believe that this vine is only 2 years old? 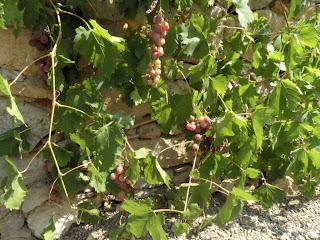 We and our guests have moved on to Spanish time - dinner has moved itself slowly forward to around 9.30 as it's just too hot to think about eating before then - and we're all making good use of the shady 'Zen' terrace: 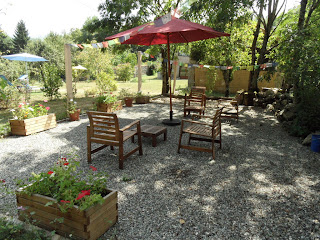 The heat is considerably less intense today - only 27 degrees at the moment - and there are rumours - only rumours, mind - of a little light drizzle tomorrow. Then we're back up into those thirties again ...

And then we're into September and October, which traditionally are Ariège's most beautiful months - warm, golden, balmy. But who knows, this year?
Posted by Kalba Meadows at 14:01

We are feeling the same changes on the western side of USA. Trees are changing colors and leaves are falling. Wildfires are too numerous to mention. And way up north to Alaska, the icebergs are shrinking. But be assured, there is "no such thing as global warming."

I read just yesterday about the exceptional melt in Alaska, Sandee. In spite of the 'no global warming' waffle that so many people try to fob us of with it really feels to me as if there's a huge change in weather patterns. The biggest shift seems to be towards the extremes. I've just come in for a cool down in the middle of hoeing (or trying) to hoe the potager, which against all the odds is producing like it's never done before!

Your trees are certainly very stressed aren't they Kalba? But it does take a lot to kill an oak. I would leave the cherry and see what happens - after the hurricane in '87 we had quite a few trees that we just couldn't get to and they all re-grew (albeit some at funny angles). Let's hope you have a deluge soon (we've plenty to spare over here) but like Camelot, after midnight.