Meanwhile, back at the ranch ...

... life goes on. Markets might be chaotic, recession predicted and pronounced throughout the western world, but still the veg grows, floors need to be tiled, leaves need to be raked, seeds need to be sown, walls need to be knocked down, and difficult decisions need to be taken.

One of the reasons we fell for Grillou was its trees; we're both archetypal treehugging types, and a decade of tree-sparse North Norfolk plus half a year in deforested Aude had left its mark. So it's particularly hard to find ourselves now in the role of executioner. But nevertheless, starting next week out will come the chainsaw and down will come several ancient plum trees (actually little more than a collection of lichen held up by some rotting bark. The blossom was pretty though), half a dozen or more young ash trees, a big old sprawling walnut that keeps on doing its best to sprawl into the salon, six light-eating leylandii (enough said) and - most difficult of all - four beautiful maple trees.

I'm not good at dealing with damage and destruction. Actually, that's a bit of an understatement: I'm almost neurotically unable to deal with it. If I break something accidentally I'm unconsolable; if someone else does it I'm apoplectic. When my ex-partner once sat on and broke the much-loved pink sunglasses that I'd left on the driver's seat when we were staying overnight in Beaumont sur Sarthe (see how I remember the finest detail? I'm ashamed to admit that I can even tell you what we'd eaten the night before ...), I stomped off so far that it took him hours to find me and we nearly missed the ferry. For heaven's sake, even knocking out a wall or an old kitchen is traumatic. So you can begin to imagine how angst-ridden has been the decision to cut down our trees.

The maples act like a line of defence against all comers, sitting as they do along much of the west-facing front of the house, right outside the main front door. The walnut does the same at the south end, along with a lovely old ash tree that has been spared but is up for radical beheading next week. The plum trees defend the east face. While the maples remain, energy will stay stuck, and while we might issue an invitation to be here, Grillou won't. So go they must. And in the process a lot more light will reach the house, so that this rather dark and dingy corner... 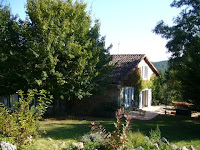 will turn into something more like this (without the ridiculously big maples on the left) ... 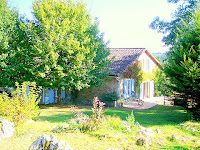 For any other tree lovers out there, here's a glimpse of three of our favourites: the willow, that stands guard over its own bit of garden and the 'hot' potager: 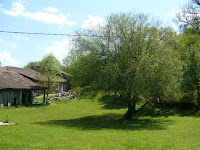 and two of our centenary oaks, much loved by all our birds but especially favoured by the black woodpecker: 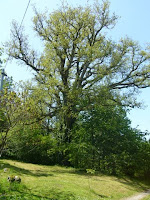 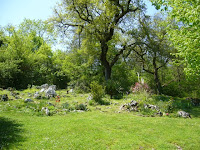 So let the destruction commence. But best keep away from me for a while though. Especially if I've got the chainsaw in my hand ...
Posted by Kalba Meadows at 14:10