A what-the-hell weekend in Luchon

What do you do when the clocks are about to change (and you know you'll go into mournful mode for several months), Metéo France are for once confidently predicting three clear and sunny days, and you've finally finished renovating the kitchen and the salon that you started a year ago? You make an instananeous what-the-hell decision to go away for the weekend, of course.

It took us just half an hour on Friday morning from the what-the-hell moment to actually driving away down the track with boots, binos and books (and not a lot else) stashed in an ungainly fashion in the back of the car. Even now, two years on, the idea of a weekend away still holds a rare thrill: during the resto years weekends went by in a blur of bookings, bed changes and fourteen hour days behind the stoves. (Bizarrely, it still has the power to induce more than a touch of guilt too, as though we really ought to be slogging away doing something. Isn't the human psyche strange?) But guilt or no guilt, we decided to head off to Luchon, in the far south of the French Pyrénées just a few kilometres from the Spanish border, and just over an hour and a half (on the twiddly route) from Grillou. 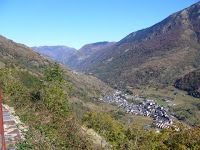 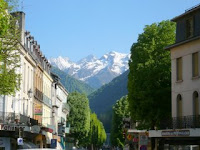 Luchon is a kind of reinvented spa town; if you've ever visited a 'traditional' thermal resort here you'll know that they're not exactly renowned for their - er - dynamism. Whilst still heaving with curistes in season, Luchon promotes itself as a centre for walking and snow sports as well and so attracts a livelier sort of crowd than just the dressing gown and slippers brigade. In fact it has a strangely metropolitan vibe for these parts, with people gathering at the cafés at apéro time, and in particular on Sunday morning, to drink wine and coffee, read the papers, do the crossword and watch everyone else doing the same thing. A bit Toulouse-meets-Harrogate, with which it's twinned. We loved it. Part old mountain village, complete with narrow streets, steep rooves and wooden balconies; part Belle Epoque spa town, very elegant with tree and café-lined allées for endless promenades, parks and sumptous villas.

In true Slow Weekend style, we spent a decent amount of time just hanging out (drinking wine and coffee, blah blah blah), aided and abetted by the Foire de Toussaint which took over the town on Saturday during which we were, amongst other things, force-fed endless (and free) morsels of locally produced beef and lamb (and wine, of course) with no hint of a sales pitch, or even anyone to buy from. In fact I was struck by the overall generosity of the place, unusual perhaps for somewhere so dependent on tourism. Just remember, should you go there and should you dine there (and you will), to order much less than you think you can eat, otherwise you'll end up like me staggering womanfully round the town until midnight on Friday after an extraordinary dinner of potiron soup, omelette aux girolles, organic trout from Lac Oô with almonds and seventeen thousand vegetables, including the best chips I've ever eaten (cooked in duck fat, apparently) and a crème caramel with a hint of wintergreen. Oh yes, and it cost 15 euros, at the little one star Logis de France we stayed at, Les Deux Nations, that's been run by the same family since 1917.

When we weren't eating or drinking or people-watching, we:
Had a quick trip to the Val d'Aran over the Spanish border to (a) stock up with manzanilla, which I can't do without and (b) see what it was like (over developed and overpriced in parts, on the to-be-explored list in others);
Walked, most memorably from the 1700 metre high Port de Bales above the Vallée d'Oueil where we stumbled on the most fantastic 360 degree views, including the Maladeta massif, the highest part of the Pyrénées where there are still (but only just as the climate changes) four glaciers and Aneto rises to over 3400 metres. 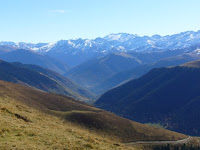 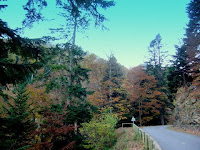 Watched a group of around forty griffon vultures wheeling overhead; had an eyeball to eyeball encounter with an alpine chough; saw two flocks of snow finches, several alpine accentors and two golden eagles: all birds that people travel for miles and for years to see ... and there they were.
Had our breath taken away, not for the first time, by the clarity of the light and the autumn colours. 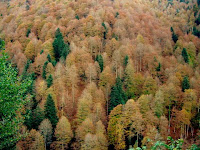 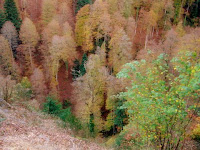 Sometimes I just have to pinch myself and tell myself that I really live here.
Posted by Kalba Meadows at 21:50