A hole in the ground

Winter has arrived at Grillou. Several centimetres of powdery snow fell yesterday - a day when the other side of the valley disappeared completely from view, and it barely bothered to get light at all before dusk fell again. Today, the skies are still heavy, there are occasional snow flurries, and our highest temperature has been minus 4 degrees. Mind you, that's positively balmy compared to the north and east of France, which is shivering under temperatures of minus 15. Cold air streams from Scandinavia and Siberia, I gather. We've been amusing ourselves trying to identify all the animal tracks which have been left in the snow overnight and which show just how busy things are here when we're out of it all under the duvet. Oh yes, and topping up the birds' food (there are around 40 of them on and around the feeders at any one time today) and breaking the ice in their water bowl every hour.

Knowing that the cold spell was on the way, we'd spent the last few days turning over the new bit of potager. Actually, we've got ourselves into a bit of a hole here, so to speak. Last spring we decided to mulch the whole area (it's an extension of one of our current beds) with left over cardboard removal boxes and straw - sound permaculture advice which we've followed before to really good effect. Huh! When we took what remained of the mulch off in early November, we were faced with a slimy, smelly sea of sludge that you could skate on (when you were bored with alliterating, that is). It bubbled, gurgled, ponged to high heaven and was distinctly not diggable. I remain baffled to know quite what went wrong, but after two months it was still looking decidedly dodgy and Something Had To Be Done. So we set to with the spades, turning over ton-weight clods in the hope that the frost would do the rest ready for us to rotovate in February. All very fit-making. I'm told that one day I may even be able to walk upright again.

This was, as you might have gathered, not a pleasant experience. A treat was therefore in order. So. Bottle of something bubbly? Some posh fish? A nice bit of saignant steak? Nah. I decided to build a fire pit.

One of the things that happens when you've just got so many essential things to do on your house is that only the essentials ever get done, so doing something just-for-the-hell-of-it becomes fun. I've wanted to build a fire pit in the area we call the willow garden for a year now - there's a kind of natural mini stone circle there that's just crying out for a fire in the middle of it, with people to sit round it, and cook on it, and sing, and tell stories. To me there really is something magical about a campfire: people who'd lose interest in a TV programme in minutes are transfixed for hours staring into its flames, and sharing a fire - sharing light in the darkness - is one of the fastest, oldest and deepest ways to create community. I lived for some time in a small community in England whose raison d'être was running alternative camps - dance, song, meditation, healing, celebrating the ancient festivals - and for several months of the year I would smell indelibly of wood smoke, as camp life takes place within circles of tents pitched around fires. Each circle becomes a community within a community, sharing daily life, cooking, stories, support and an incredible amount of relational depth, with the fire holding the space at the centre. I miss it.

So Grillou's garden now has a hearth. If you're inspired and want to build a fire pit yourself, here's how I did it:

I lifted the turf (if this were to be a temporary pit it would be replaced when I'd finished using it) then dug a circular hole, around a metre and a half wide and 40 centimetres deep, and flattened out the bottom. 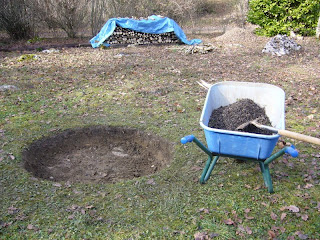 Then, to help with drainage, I covered the bottom of the hole with some gravel that was knocking about. 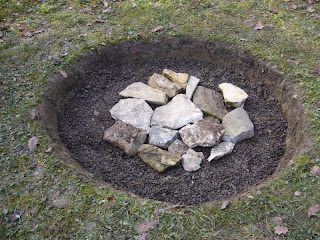 On top of the gravel I set down several flat rocks to make a base for the fire, then spread around some old building sand to bed them in. Finally, I built a kind of retaining wall inside and around the circle using some of the thousands (I'm not kidding) of rocks that litter our land. It's not essential to do this - I wouldn't do it on a temporary pit, for instance - but as well as holding the shape it makes for a more attractive pit. 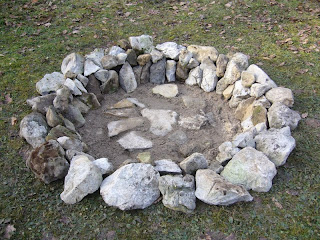 Then, on a chilly but just-about-sunny afternoon, I made a baby fire, and we sat round gazing at it for a couple of hours ... Next step will be sawing up a couple of tree trunks to make some seats, then I can look forward to some smoke-and-song-filled evenings this year and onwards ... 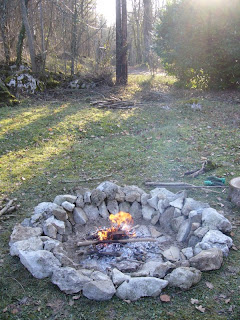 So, a very happy, healthy and (as far as can be) sufficiently prosperous 2009 to everyone. For us this will be The Year of Grand Disruption: the major work on our guest accommodation starts, finally, in spring, ready for all of you this time next year ....
Posted by Kalba Meadows at 16:01