For anyone fascinated by birds (and how can you not be?), early May is a particularly awesome time to be at Grillou. The Main Attraction, of course, is the almost continuous song, from dawn to dusk and beyond: blackbirds, thrushes, robins, blackcaps, various finches and warblers, nightingales, tits, wrens and dunnocks are the prima donnas, whereas the chorus is provided by the cuckoos, woodpeckers, turtle doves and hoopoes, and sporadic acts of drama by buzzards, black and red kites, the occasional eagle and other raptors. At this time of year it's all very in your face, to use that inelegant expression: the wrens have a habit of sneaking up behind you and suddenly bursting into energetic song; every morning, from before dawn, a blackbird sings just a couple of metres from our bedroom; and I opened the bathroom windows yesterday morning to be confronted by a nightingale in full flood in the maple tree less than an arm's length away (he just looked at me, grinned, and carried on as if I wasn't there ...). And so on. 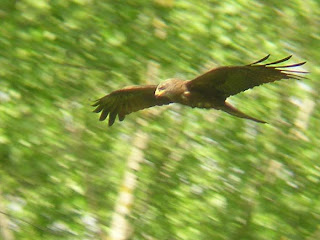 A black kite in motion

I've always enjoyed watching birds - caught it, I think, from my mother, who would sit quite literally for hours watching the tits at the feeders just outside our living room window (much to the incomprehension of my dad who could never understand why she didn't want to be 'doing something'). But I'm not a twitcher. When we lived in Cley next the Sea, on the marshes of the north Norfolk coast, we'd encounter endless twitchers, busy with their bird lists and their special pagers alerting them to sightings and more kit than I'd take on a month's camping holiday. It's all a bit close to trainspotting for my liking, and it certainly doesn't do anything to bring you into relationship with particular birds so that you can find out what makes them tick. Because if I've learned one thing from my years of watching birds, it's that birds - like people, or dogs, or horses - are individuals.

Take, for example, one of our male blackbirds - the one who (now) sings outside the bedroom. Whereas most blackbirds here start to sing properly in early March, this one remained resolutely mute, to the point where we decided that he had a speech impediment. While all the others around him were practising what would become this year's fave phrases, he would sit silently and listen: head tilted, mouth open, looking quizzical, as if to say "how do you do that?" One day we found him under a bush, engaged in a hugely complex subsong - an unstoppable under-the-breath stream of twitters, babbles, hums, calls, and good old blackbird operatics. Several days of subsong ensued. Spring advanced. And then finally, as it was getting dark one evening, I spied him sitting in a branch close to the terrace, looking exactly as I remember feeling when I was eight years old and about to jump off the high diving board for the first time. (He did much better than me. I cowered on the top of that board for five hours ...). Sure enough, a few minutes later, he let rip with a song phrase. 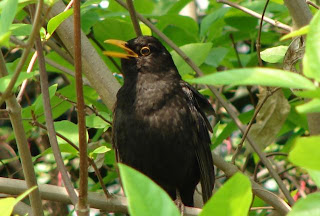 He did the same the next evening, and the next, graduating from one to several bars. After a week, he was unstoppable: he sang from the same tree and from dawn to dusk, his song incredibly complex and varied, barely stopping to find food. But then things started to change. A week ago, he began singing in what I can only describe as an obsessional way, repeating just the same 2 bar, 8 note phrase in a near continuous loop for 15 hours a day: perfect pitch, perfect timing, perfect rhythm. After a day or two it became tedious. After four or five, it became meditative, like a mantra. It's behaviour that you'll never find in a bird book. I reckon he's a reincarnated enlightened master.

I could also tell you endless stories about a manic depressive wren, or a female chaffinch who taught herself over several days to fly up to and cling on to a long-coveted fat ball, or a cuckoo who sings half the night and has such a loud, resonant call that he must surely come equipped with his own echo chamber, or Turdus Tedious, the Most Boring Thrush in the World. But they'll have to wait. Or better still - shameless plug for our forthcoming guest acommodation - come and stay with us in one of our Birdsong Weeks next May ...
Posted by Kalba Meadows at 22:17

My last home was in the Lower Wye Valley (just upriver from Tintern Abbey), and surrounded by heavily-wooded hills. One of the greatest pleasures of that location was the variety of birdlife - and the sound of owls at night!
Clee next the Sea a lovely spot - not a fan in general of low-lying landscapes; but love the N Norfolk coast ...