We have plumbing, we have hemp, and we have ... landfill

This has been a good week. (Mainly. More of that in a minute).

We've finished destroying two ancient shower rooms, chiselled off more white tiles than you'd need to open a shop, knocked down a wall or two and a few bits of serious concrete, and become very friendly with the guy at our local déchetterie, who now thinks we have nothing better to do than to visit three times a day with a trailer full of building rubble. Plays hell with the fingernails, but it's great for my arm muscles, which haven't been so - er - obvious since the days when I used to unload and dry up 144 heavy white plates from the dishwasher every night.

We had an exciting moment (yes, I know, sad) when a fork lift truck from our lovely builders' merchants in Saint Girons actually made it down our narrow, rocky track (weight limit: 3 tonnes) with a huge pallet of stone for the new terrace (weight carried: 8 tonnes). Oh, and it's coming again next week, twice. Don't tell the local council. Don't you just love France?

Following the complex task of completely replumbing, from scratch, the rooms in our new guest accommodation, Wednesday saw the Ceremonial Turn On: and yes, we have water, we have waste and we have no leaks. Not one. Not even a dribble. I - unlike our uber-perfectionist artisan (it takes one to know one) who spent several nervous minutes pacing and biting his nails before we turned on the stopcocks - expected nothing less. But it was cause for a bit of a celebration nonetheless. 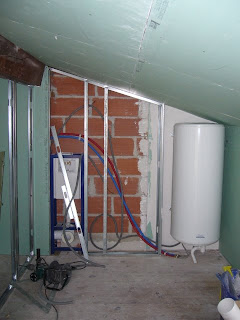 We have hemp. Two thousand litres of it, ready to be mixed with sand and lime to make an insulating plaster for the stone walls in what will be the bedroom of L'Atelier. Now this is really exciting: it's brilliantly environment-friendly, hugely effective, and pretty damned attractive to boot. It's also how I first met The Uber-Perfectionist. Long story. 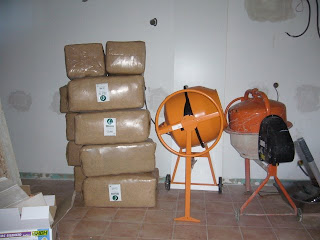 And finally, after half a millenium of wet weather delay, we've managed to start digging out and preparing the ground for a new car parking area, a dining terrace and a stepped path to L'Atelier. It's backbreaking clod-by-clod work, largely because the ground is so wet, but hey, it's only 69 square metres ...
And here comes the yes-but. Ever since we've moved in I've wondered why there was a strange shaped grassy hummock outside the door of L'Atelier; today I found out. It's a landfill site. 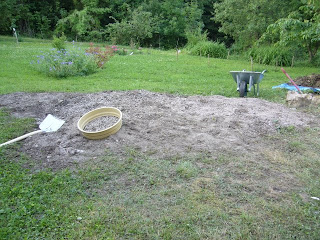