Zen and the art of hemp and lime

Exciting things are happening right now in the huge first floor room that will become the bedroom/salon of L'Atelier, part of our guest accommodation. Nearly 50 square metres in size, with a ceiling height of over 5 metres and fantastic vast windows to two walls, set into the original barn openings, it was used by Grillou's previous owner as an artist's studio but was never completely finished: bare stone walls, basic wiring, halogen lighting, ventilation pipes from shower rooms and loos protruding into the room. It's a stunning space - it probably sold us the house - which needed something equally stunning doing to it. That something baffled me for quite some time.
Until, a year or so ago, I read an article in Maison et Travaux (my fave French doing-up-house magazine) about chanvre-chaux - hemp and lime plaster. I was hooked.
Hemp has a list of uses that would give most other plants an inferiority complex (did you know, for example, that the bodywork of the first Ford car was made from something called Hemp Plastic?), though it's in the arena of green building and renovation that it's really beginning to make its name. Mixed with lime, it creates a breathable, sculptable, warm, stone-wall-friendly, insulating plaster which is highly strokeable and has great character. As if all that weren't enough, research suggests that it's not just carbon neutral but negative: hemp absorbs a huge amount of CO2 as it's growing, and effectively sequestrates it in the walls: up to 50kg per square metre of hemp walling - much much more than the meagre CO2 emitted in the production of the lime.
Hemp has been used in building in France for many years, where it's widely grown (archaeologists have reputedly found a sixth century hemp-reinforced bridge), and is gathering quite a following now in Ireland too; sadly, I'd never really come across its use in England, where it would have so suited our cold, hard Norfolk flint walls. Sigh. French eco-builders have adopted hemp and lime in a big way; most often used in new-builds (where it can be used in almost every part of the construction, including foundations and floors, using a material known as 'hempcrete'), it's just beginning to be used in our kind of 'retro-fit' restoration.
Given all that, how could I even think about using anything else? A chance encounter with our charming and good looking Perfectionist (there - will that do? Just knock it off the bill ...), much research and many conversations later, and we were away. And last Wednesday, the process began. I don't know which of us is more excited by it .... Anyway, here goes the week, in pictures.

Our builders' merchant manages, somehow, to squeeze the tipper lorry into the tinest space to deliver over 6 tonnes of sand ... 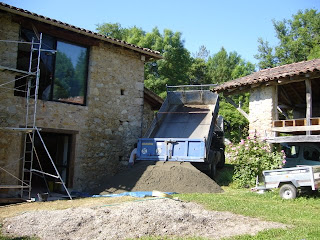 ... and uses an amazing amount of skill to drop two pallets of lime, and (narrowly, and fortunately) miss the telephone wire: 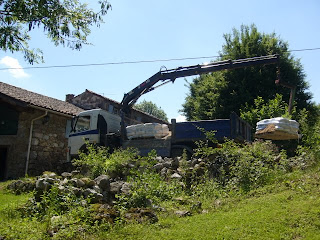 Phew. Just half an hour after the delivery, the long-awaited process begins. Our three guys are all going full pelt and flat out. One is The Mixer: his job is to keep two cement mixers going simultaneously, the contents of which are transferred into buckets ... 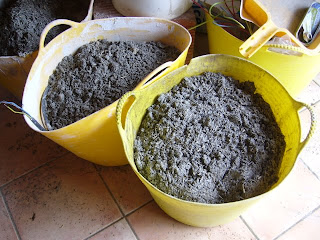 ... then winched up to the first floor by The Wincher: 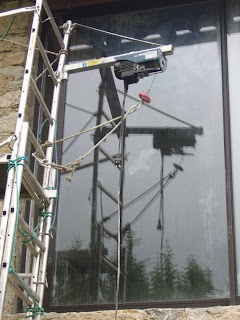 The first stage is to apply a coat of lime render to the bare stone walls, to prepare them for receiving the hemp plaster. Because of the sheer scale of this job, this (together with the initial coats of hemp plaster) is being sprayed, under pressure, onto the stone walls to make sure that all the gaps between the stones are completely filled. This is naturally the task of The Perfectionist, although The Wincher makes sure he gets a bit of a look in here too. A little non-human assistance is required as well, however ... The final sprayed coat of hemp plaster is then 'scratched' in preparation to receive the finishing coats next week: 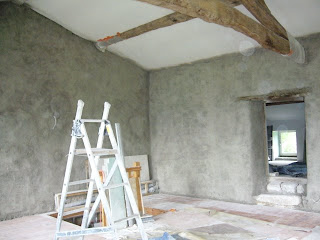 Someone described the application of hemp and lime as being a bit like trowelling tuna mayonnaise onto walls ... Hmm. Moving swiftly on ... look at these lovely rounded corners: 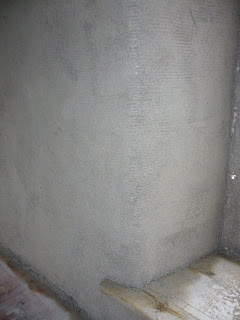 Two and a half days in, and two thirds of the walls are now 'scratched' and ready for their finishing coats. The sun shone relentlessly; the temperature hovered around 30 degrees in the shade. The guys worked from 8.15 to 6pm, with just a couple of breaks, while we also sweated digging out the dining terrace just outside and shifting hundreds of big stones. They'll no doubt think I've completely lost it for saying this, but there were moments - hours - when the task - hard, hot and dirty though it is - became a kind of dance; when the rhythm took over; when all three were lost in total awareness of what they were doing; when the process was all.
Zen moments.
Posted by Kalba Meadows at 17:12