We're builder-less. Having reached the halfway point in the main project, they've bogged off for the summer, bless their little cotton socks, leaving Grillou unaccustomedly quiet. I can honestly say that it's the first time in my life that I've actually missed my builders. And having four - or more - of us here every day for the last two months has just confirmed my feeling that this house really loves to have people in and around it. As, in fact, do I. Well, most of the time, anyway.

So in the absence of good company and exciting events like walls coming down there's nothing for it but to get on with the grafting. And this is where, much as I hate everybody else's smug, look-what-I've-done-aren't-I-clever blogs, I'm going to inflict a bit of one on you now. Just a tiny bit, I promise. If this offends you, look away now. But I've just done something I've never done before, and it's worked. I've laid a terrace, out of random stone.

Originally, John was going to take charge of all the outside work to create terraces and steps and paths and things while I acted as his labourer. But, well, you know how it is. Being anybody's labourer is not my strong point. I much prefer to be out there, leading from the front. John, meanwhile, is much more easy going and is quite happy to do things my way ... which is probably why he's tolerated living with me for longer than anyone else has, or would :-). So he's been overcoming a surprise phobia about mortar by manning the cement mixer, while I get to clamber around on my hands and knees laying screeds and trying to piece strangely shaped bits of stone together in such a way as they look as though they've always been there.

Here's the man himself, working hard over the cement mixer ... 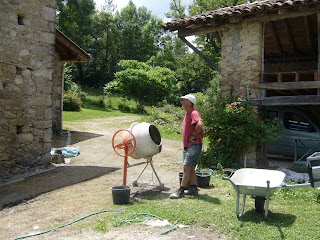 The terrace, in progress ... 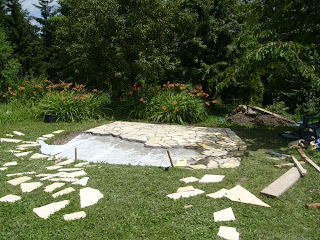 ... and finished (well almost; I still have the jointing to do): 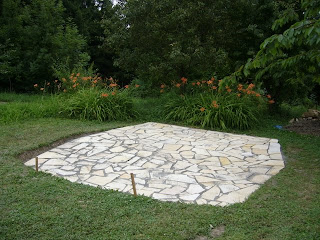 There are unforeseen advantages to spending four days with your nose against the ground. One early morning (it was so hot that we had to start work at 6.30 to avoid the mortar going off before I could work with it) I encountered these two striped shield bugs in a compromising position on some parsley stalks: 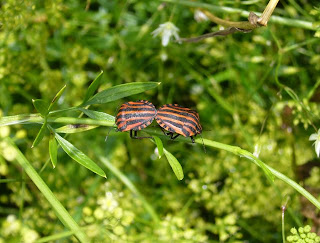 And I made a surprising discovery about butterflies. They love cement. Every afternoon, as the temperature hit the late thirties, the pools of waste mortar on the ground would swarm with dabs of flying colour, including marbled whites, silver washed fritillaries, white admirals, clouded yellows, various coppers, blues, ringlets, and this gorgeous purple emperor: 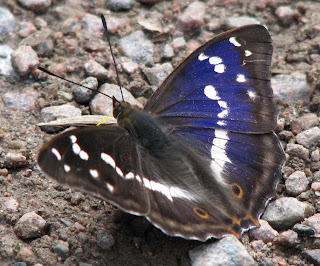 Apparently, it's the minerals and salts in the cement that attract them. Bizarre but true. So if you want to attract butterflies to your garden, forget the buddleia. Just get the cement mixer out.

Remember, you read it here first.
Posted by Kalba Meadows at 12:39

Beautiful terrace, Kalba - chapeau!
Loved the pic of purple admiral; don't recall ever having seen one in the wild.
Perhaps you could register with help exchange, and get some hard-working bods in for the summer if you want/need to crack on with the work?
Did you see previous posts, btw - they seem to have mysteriously vanished into the blogosphere ...!

Just came across your blog. I'm glad you posted an aren't-I-clever part of your post - it reminded me to take a picture of our half-finished patio and to photograph our fence that's in the making. We're north of you in the Midi near Montcuq. Your place looks lovely and looking forward to stopping by again! Lovely pictures of the insects and butterfly, it's amazing seeing them so close up isn't it?!

Glad you like it! the terrace, that is. I'm quite pleased with it myself (not that you'd have guessed ...).
We have actually considered helpx, but for the moment have decided not to go that way - mainly because it's so satisfying to do things ourselves. But it's a good idea, and later we have got some plans up our sleeves to host some helpx bods to do some woodland management.
Not sure about which posts have disappeared, which means that they probably have disappeared where the sun don't shine ...

Hi Frances and welcome! And ooh, yet another blog for me to get stuck into late at night when I really should be in bed ...
Good here, isn't it?