If there's one thing that finally tells me that the earth has turned and winter has gone it's asparagus. Part of that glorious sequence of firsts that marks the transition from spring into summer, along with the first broad beans, the first peas, the first strawberries, it's a classic example of seasonal eating: something to be longed for, gorged on, and then mourned for … all in the space of a few weeks. It’s a bit like a holiday romance: all the sweeter because you know it can’t go on.

In our restaurant days asparagus was a Big Thing: Norfolk was one of the UK's prime producers, and we had several of the best within five or ten kilometres. For six or seven weeks, barely a day would go by without asparagus making an appearance somewhere on the menu; indeed, many people would travel and book specifically to eat it. Here at Grillou, at the moment it's just us, but oh, it was still a happy day when I saw the first proper asparagus at Saint Girons market last week.

The French, for some reason I just can't fathom, traditionally despise green asparagus. Ditto the Dutch, the Belgians, the Spanish, the Germans ... and for all I know the rest of the world. Except, of course, we Brits, who worship it, even if it does make our pee smell. But for everyone else it's the fat white stuff that gets them going. Heaven knows why; it's watery, slimy, tasteless and invariably overcooked (whoops, there goes another pile of street cred ...), and you have to peel it. But at this time of year the markets are stuffed with it, and every stall is besieged. 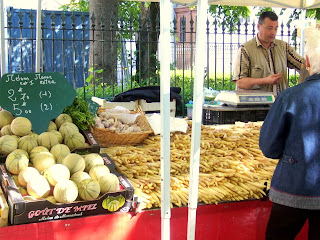 The green stuff, on the other hand, is not easy to get hold of. To be honest, it's been one of the few food disappointments since moving here. Even the green asparagus I have managed to find has been monstrously fat like its white cousin. But ... this year we have a new producer at our market. And they're selling no less than 9 varieties and grades of asparagus, including - oh deep joy - two sorts of green: the fat stuff, and real, proper thin spears. No carefully weighed, neatly trimmed bunches here: there are great mounds of it, lying loose for the picking, for only 2.80 euros a kilo. We bought some last week and it was so good we went back for more - lots more - today. As I was shovelling handfuls of it into a piece of newspaper a French woman, curious at my buying habits, asked me what it tasted like. Now that's not an easy question. In the end I broke her off a piece of try raw. Her eyes lit up. She bought four kilos. The revolution is here ... 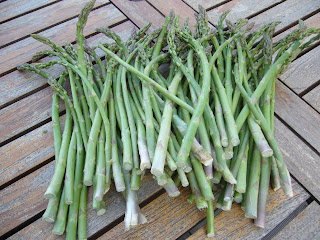 Tonight we ate asparagus with penne, lardons, crème fraîche and parmesan. We followed it with these: 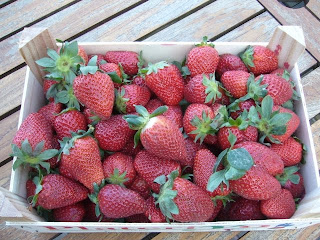 Well, maybe not quite all of them. The rest, and another 2 kilo box like them, will be transformed into jam tomorrow. The first year we moved here, I couldn't understand why I couldn't find any strawberries in June. I was too late: although there are a few varieties around later on in small (and expensive) quantities, the main crop comes at the end of April and very beginning of May. No tennis strawberries here ... But as you read this, jam will be being made in humungous quantities all over the south of France - which leads on to one of life's great unanswered questions: just what do French households do with the vast amount of jam that they all seem to make each year?
Posted by Kalba Meadows at 23:27

(We use what is called Braggs Amino Acids rather than soy sauce = less salt....but same flavor).

I believe you will enjoy this.