Three weeks ago we took a break. A short one, but away from each other, and for me, away from Grillou too. And as so often happens, those three days became a sort of punctuation point during which we both realised things that we hadn't consciously realised - or rather, hadn't allowed ourselves to realise. One of those things was that we both felt - feel - completely incapable of continuing to live in the sort of building site shite that our house and garden had become. When we set out we'd anticipated all that bit being over and done with in 6 or 8 months, and to live like that for a short and finite period seemed a perfectly realisable, if not particularly pleasant, choice. That was 14 months ago. It's now intolerable.

Although we can't do much about the fact that the work isn't finished, we decided that what we could, and would, do was to make a priority of sorting out the bits of the house that we live in, and the garden. Six solid days of house cleaning later for both of us (yes, really), I could see surfaces I'd forgotten were there and no longer felt the need to issue protective overalls and masks to anyone foolish enough to visit. And so we turned our attention to the outside, in my case to the frontage of the house which is not only the bit you see first as you walk or drive up, but the bit that's been covered with cement mixers, lime, cement, sand, tarps, tools, materials and builders for over a year. From our driveway a wide gravel path sweeps along the whole length of the house; even before our time it hadn't been maintained or raked or topped up and so was not only full of grass and weeds but also completely impacted and encrusted with moss as hard as cement. What started as a simple - or so I thought - job of weeding and raking turned into two weeks on my hands and knees breaking up the moss with a hand hoe and then pulling out every strand of greenery with my fingers. It's a bit like one of those tasks you get given on a meditation retreat: mind-numbingly tedious, and faintly pointless.

This is what I started with: 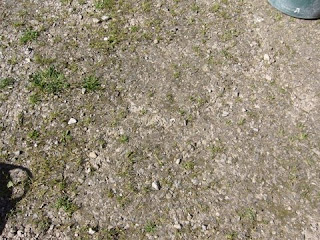 Not pretty, is it? (Nor are my hands. Or my knees). But at least I could sit in the sun, listen to the birds singing, and watch this year's pair of black redstarts feeding their young in the nest just a couple of metres away from where I was working, and then leading them out on to the barn roof for the first time. They're curious birds, and seem as fascinated by me as I am by them. Both parents are the browny-grey colour usually reserved for the female (the male is generally a dark steely grey, almost black), and for quite some time I was convinced that I'd spotted the world's first pair of gay birds. Sadly though I'm not about to go down in the history books; according to some obscure Scandinavian paper that Google dragged up for me, it's recently been discovered that quite lot of young male black redstarts spend their first breeding year in drag, only dressing appropriately for their gender when they're two. Oh well.

So now, just to convince you that Grillou is wending its Slow way towards being beautiful (and open!), and to indulge my current and rather smug feeling of Having Done Something Useful, here's a glimpse of what you'd see if you were to arrive here tomorrow: