The most incongruous sound in the world?

Hello again, world. I'm back. Not that I've been anywhere, mind you. Couldn't, even if I'd wanted to. We've been tree'd in.

We woke on Tuesday morning to a grey, dank, wet, freezing cold day - thermal vest territory, and quite a contrast from the 26 degree plus temperatures of the previous week. 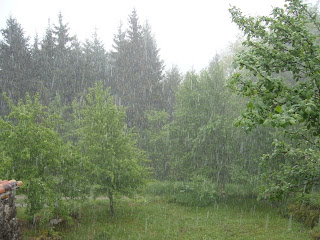 By ten o'clock the odd snowflake was making its appearance. By half past we were in a full blown blizzard. 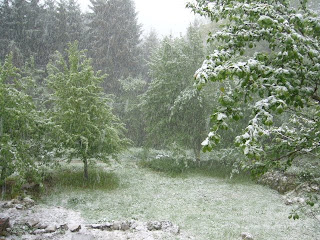 By eleven o'clock our world was white, and the newly-in-leaf trees all around were creaking under the strain. By half past all we could hear was the sound of tree branches snapping under the weight of the wet, heavy snow and, every so often, the more ominous crash of a larger tree falling. At midday, we lost electricity. An hour later, our mobile phone signal went the same way. 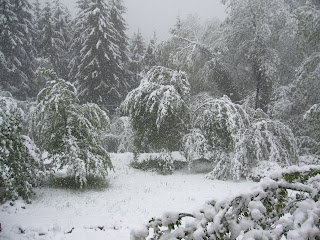 A wellie-booted foray down the track to see what was going on was quickly aborted as branches and trees were falling like dominos, but not before it became patently obvious that we were going nowhere fast. The track was an impassable obstacle course. A thick, heavy oak branch balanced squatly on top of the main high tension electricity cable. Gulp. We retreated back to hot porridge and gave thanks to the goddess of gas hobs.

A while later a white figure appeared in the kitchen: our neighbour, bearing a hefty mechanical telephone and the news that her power cable had, under the weight of falling branches, been wrenched off the wall of her house, severed, and was now lying on the ground. She shook, slightly, and not from the cold. We plugged in the phone and found that, miraculously, we (unlike her) still had a faint connection. Like the rest of Ariège, we phoned ERDF, who are responsible for the electricity infrastructure, to be met with a recorded message telling us that over 25,000 households in the department were without power and Something Would Be Done About It, Sometime.

Two candlelit dinners and nights filled with fantasies of hot showers later, it was. Track cleared, electricity back on. Garden damage sadly noted: one lilac tree, one old plum, shrubs flattened, several ashes and a maple stripped, roses battered and ripped. Two hundred year oaks unscathed. And so, largely because I've become as superstitious as the French about planting before the Saints de Glace, was the potager.

Today, the air resounds with the noise of chainsaws. And the most incongruous sound in the world? The song of a nightingale, in the snow.
Posted by Kalba Meadows at 23:25