This is the time of year when fellow bloggers write lamenting their lack of summer postings, claiming (variously) holidays, traumas, an endless round of summer socialising, or just The Unforeseen Passing of Time. I'd better do the same, given my absence from your screens for longer than I'm happy about: I can't, though, claim any of those reasons - just the usual trying to fit three jobs into days designed for only one. It's all a bit déja vu-ish, really - summer in our restaurant days was always a time of eighteen hour days, too. Ah so. This too shall pass.

This week, however, we're taking a holiday. In Ariège. We decided to do something that ironically we've never done: to be tourists in our own département. And to do all the things that we enjoy doing when we're on holiday - like walking, and sitting on café terraces with cold beers and a book, and watching birds, and exploring out of the way villages, and having picnics, and trying out lots of local restaurants, and just sitting in the sun looking at a great view - here, within an hour or two of home. Partly so that we can put together some Slow Walks and Slow Routes for next year's guests, partly so that we can experience what it feels like to be a visitor here so that we get a better sense of how to help other people have a great holiday ... but mainly, admittedly, just to have a good time ourselves, away from our various day-and-half-the-night filling jobs.

And so to kick off, after coffee and croissants at Seix, we spent most of today walking up above Ustou around Le Tuc de Peyre Mensongère. Getting to the start of the walk was 'interesting', and perhaps not for the faint hearted, as it entailed a 10 kilometre drive up a lumpy, bumpy forest piste (and no, we don't have a 4x4 ...). And I do have to admit that we wouldn't perhaps have spent quite so much time walking if we hadn't first completely mistaken the route and schlepped up - that's up as in height, not in distance - several hundred metres of a look-alike path that actually ended up by going ... nowhere (not entirely our own fault though, that the barrier on the piste had been moved 2 kilometres downhill and that the walk directions still worked, albeit defectively, in spite of that ...). But it was a fantastic walk, even if we did cover twice the distance we should have done, and the views were amongst the best you could hope for, even if it was slightly cloudy: south and west, to the high peaks on the Spanish border just a few kilometres away; east, to Mont Valier and the reserve; north, to the Petites Pyrénées, Saint Girons and even our home ground, the Séronais. 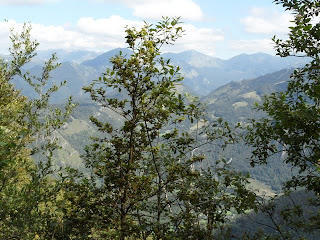 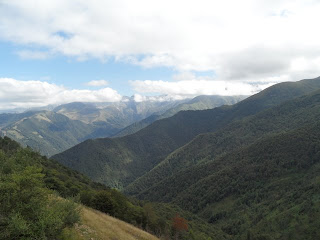 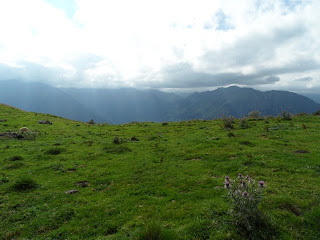 On the plateau just below Le Tuc we encountered three horses (Comtois, I think?) that were obviously up on the estive for the summer, one of whom took a real shine to John, nuzzling his arm, trying to get into his rucksack, and following him around for a long time. But the very best bit was the hour we spent sitting watching a flock of griffon vultures wheeling over head, and coming to sit on rocky outcrops just a little way above us. There must have been thirty or forty birds. It was a rare sight, and truly extraordinary. 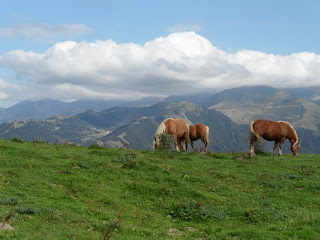 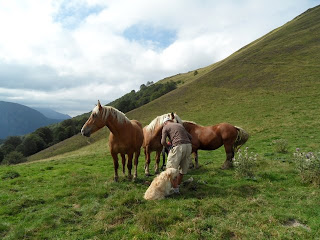 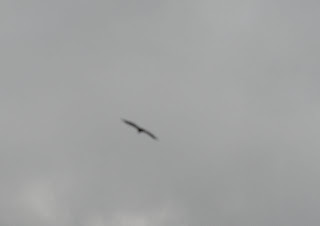 And so how else to finish the day but with an apéro and dinner back down in Seix, on the terrace at the Auberge du Haut Salat, a lovely, friendly, traditional place overlooking one of the main squares that cooks simple food, excellently, because it uses good ingredients: a wonderful buffet for entrée, followed by lamb cutlets with a tian of courgettes (there's no escaping them, anywhere! But it was good.) and slow cooked potatoes, and then a to-die-for (possibly literally, but what a way to go ...) chocolate tart.

And now to bed, and to pore over the maps to plan tomorrow.
Posted by Kalba Meadows at 11:48