An afternoon on the rocks

This morning we drove through the Garbet valley - one of the most remote, and sparsely populated, bits of the department - to Aulus les Bains, a miniature spa village specialising, would you believe, in cholesterol. Cholesterol was not, however, the purpose of our visit; we were there to walk up to the Cascade d'Ars, a waterfall in a wild and rocky valley nearby that's reckoned to be one of the most beautiful in the Pyrénées.

It's not a difficult walk; the path winds up through a beech forest, beginning as a wide rocky track and then gradually narrowing and getting steeper until for the last part you effectively find yourself clambering up a staircase of rocks. 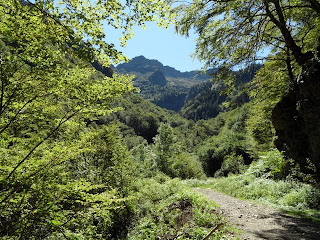 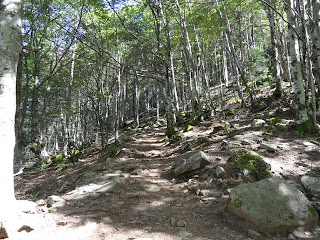 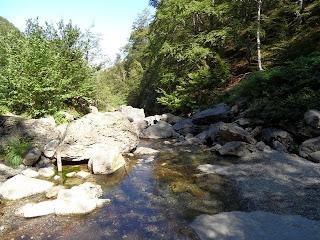 The river swirls and splashes beneath you, becoming almost gorge like in places. As you climb, the noise of the waterfall gets tantalisingly louder and louder until after an hour and a half or so, and 500 metres of ascent, you get your first awe-struck glimpse of it. 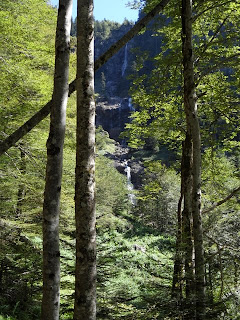 In three sections and some 240 metres high in total, the main - middle - section alone falls for well over 100 metres. The path - at this point the GR10 - takes you steeply up another 150 metres until you're level with the second 'landing' of the waterfall; from here you can clamber over the rocks and sit underneath. And so we did. 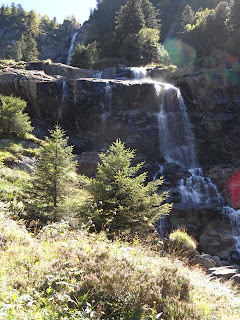 And the sun shone, and a few people came and went, and some raptors flew over head, and the noise of the waterfall was hypnotic and all encompassing. And so we stayed, and all thoughts we'd had of continuing the walk up to the Lac de Guzet were put to one side, for another day. And we lay like lizards on the rocks, and we dreamed, and we looked back down at the valley we'd walked up: 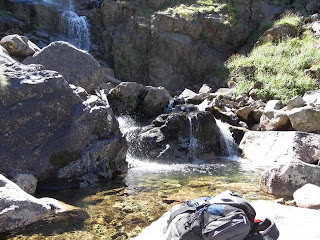 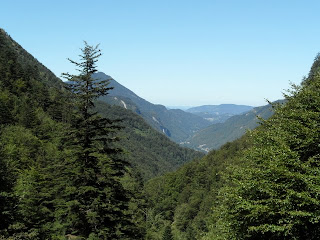 And then in the early evening, we drove back across the Col d'Agnes, and looked down on where we'd been: 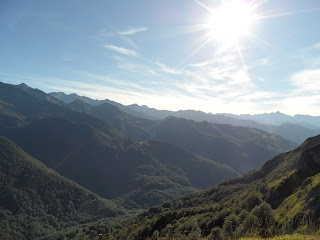 Thanks for these tourist notes from our own 'coin'. Every time we walk somewhere new-to-us, we marvel at how beautiful, how varied, and how isolated it can be so near to home.

Yes, and how many years is it going to take us to really get to know it, I wonder????