Blog silence has reigned for a couple of weeks while we've been ... up ladders. Not 'a' ladder, you'll notice; no, the plural is deliberate.

We've been (finally, and only two years later than originally scheduled ...) lime washing the walls of the goat-shed-turned-office-now-turned-dining-room. It's - er - five metres high. Hmm. Plans to use the scaffold that The Perfectionist had brought in were quickly scuppered when it had, rather suddenly, to move on to another project. We were left high and dry - or rather, dry but not high. We considered our options. Short of attaching a rope to the central beam and swinging backwards and forwards, or turning the highest wall into a climbing wall, there was only one: another scaffold. The grapevine swung into gear, and within a couple of days we'd borrowed a tower from some friends. Another couple of days (and much swearing, ranting, cursing, foot stomping and crockery smashing) later, it was up.

The problem is that the dining room is a room of lots of different heights. We've built a mezzanine gallery, which is going to house a library; there's a central beam; and the ceiling slopes down towards the windows at the front of the house, where the height of the wall is only four metres or so. And so we needed not one, but many ladders, which is why for the last fortnight the room has looked like this: 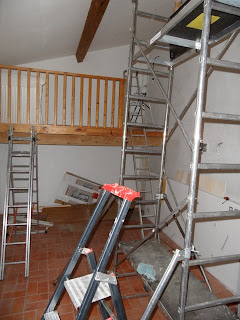 Six days, seventeen thousand colour tests, and four coats of lime wash later, the room looks like this (don't panic, the orange pine will disappear very soon, as will the white painted walls at the far end ...) 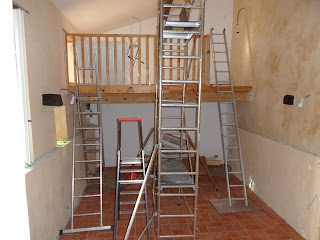 and we've got quite fond of the scaffold (yes, the same one that we spent six hours trying to fit eight bolts into to hold the two platforms ...) and will be sorry to see it go. It's made a long job hugely easier, so a big thanks to the mob at Camping Le Montagnou at Ustou for lending it to us - we owe you one!
All we have to do now is to take it apart. So don't expect to see either of us any time soon .... 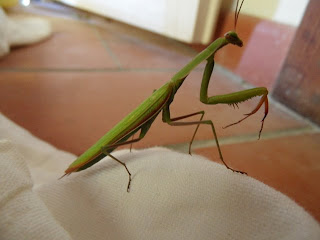 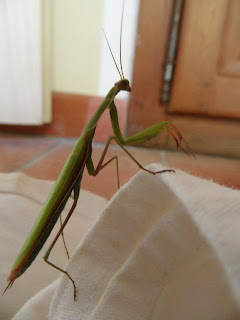 It's a praying mantis. Isn't he lovely?

What an amazing picture! Is he your building inspector? Do hope he approved the work!

Thanks for visiting, LW! Yes, he looks a bit disapproving, don't you think? He wasn't terribly communicative, though, and just flew off without a word. (Which probably means that he WAS the building inspector ...).