On progress, and the revolting French

This is a bit of a sad week for me: yesterday was my last day (for this year at least) working at the yoga centre, which is about to close for holidays until next May. I've done some lovely stuff with some lovely people from all over the world, met some other folk living locally who came, through word of mouth, for regular sessions, and reclaimed a bit of me that's been filed under 'pending' in a cupboard for the last eight years. Much as I'd love to have carried on working with my local clients over the winter, reality (as in a seriously unfinished réno and a long suffering partner who'd probably kill me) has set in and so it's back on with the blue overalls seven days a week, head down, and full on with all the outstanding bits of work.

Have you ever noticed how things that you set up in your mind as terminally difficult actually turn out to be relatively straightforward (and vice versa)?. Just a week ago, we started to put up the bookshelves in the new dining room, which on its mezzanine level has an alter ego as a library. We swiftly discovered that the wall consisted of plasterboard dotted and dabbed onto hollow brick ... some 10 centimetres away from it. Now why oh why oh why would you do that?? The dots (or is it the dabs?) were dabbed (or dotted) at random, so no chance of screwing the shelves through them. And a brief attempt to fix through the placo and into the brick was not exactly successful - it chewed up the placo then fell out of the brick, in spite of the biggest wall plug in the world. Clearly there was nothing for it but to build a made-to-measure shelving system from scratch - a solution we'd hoped to avoid because of the bizarre dimensions of the space. Sigh. So with heavy hearts, a design was swiftly put together - to accommodate sloping walls, sloping ceiling and sloping floor - wood was duly bought, and over the week the carcasses were duly made (by John), lasured (by me), and hoisted up to the mezzanine (by both of us), 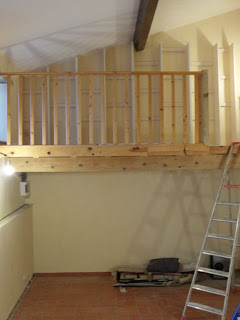 (Yes, I know there are no shelves. Be patient. There will be.)

I'm beginning to think that creating this dining room is just about the most dramatic, and rewarding, thing that we're doing: not only does it give us a whole new room and link up the two previously separated bits of the house, it really opens up a sense of space and light as you walk into the hallway from the front door: whereas once you saw this 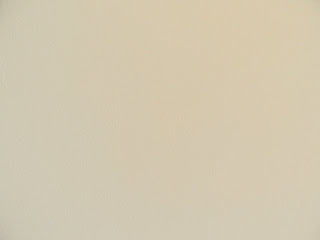 now you see this: 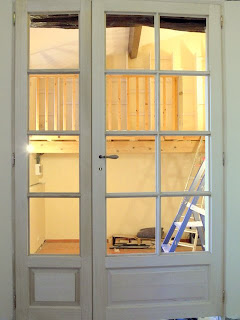 Which is just a great step forward, and gives us both the courage and the wherewithal to go on. So the next month (maybe more) will see us putting up a spiral staircase to the library area, building new oak steps down from the hall, fitting oak windowsills and skirting boards, repairing and sanding and finally painting the balustrade and window frames and doors, deep cleaning and oiling the terracotta tiles and building cupboards across the back wall using some reclaimed shutters we found in a local depôt vente.

Meanwhile, unless you've had your head in a paper bag this last week or so you'll know that the French are revolting: ostensibly at the proposed pension reforms but also I think, underneath, out of sheer despair at Sarkozy, his style of leadership and the general unfairness that his policies engender in so many levels of society. Schools are closed, transport is affected, fuel is desperately short with a quarter of petrol stations empty and millions of people, including large numbers of students, have taken to the streets. Life as we know it has been inconvenienced but do you know what? I'm proud to live in a country where people care, and are willing to show outwardly that they care rather than living in depressed apathy and/or finding a scapegoat to kick. The French, I believe, feel no differently from those living in other European countries where policies increasingly ask 'the people' (for want of a better phrase) to pay while capital continues to accumulate in the hands of the few: they're just more accustomed to showing it. And so the protests have my support, as well as that of over 70 per cent of the population, who clearly feel the way one protester on Saturday did: 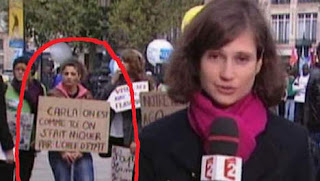 Your addition to the entry made it so much more inviting. I can't wait to see it with stairs and filled with books. What a great idea to use that space!

Yes, Sandee, stairs will be rather useful, and will save all that jumping and leaping ... but yes, you're right, it IS so much more inviting. Thanks for saying so! And it will be great finally to be able to unpack the second half of our books, after only - erm - four years ...