Once upon a time, we had a habit of spending a weekend somewhere in Tuscany at about this point in the year: to wander, to drink coffee, maybe to do a gallery or two ... and to eat. Well, okay, mostly to eat. But hey, come on, it was work: a lot of the inspiration for what I cooked at the resto came from Tuscany, and by that point in the year I was in need of a top up. Tiresome, huh?

The Tuscans are not called mangiafagioli (beaneaters) for nothing: beans play a huge part in the local cuisine. And they're sooooo good too: in the days when you could actually carry more than a spare pair of knickers on Ryanair we used to bring back kilos of them (beans, not knickers), along with several litres of newly pressed oil (if you once saw someone emptying a large suitcase at Stansted airport security and trying to explain convincingly why it was full of bubblewrap and not a lot else ... that was me). Lucca was our very favourite haunt; apart from being just a genuinely lovely little city, its oil and beans are second to none (Awww. I want to go, NOW!). It was in Lucca that I first ate zuppa di frantoiana - literally 'oil mill soup' - at a trattoria called Gigi. November is oil pressing time, and there are dishes featuring the new oil are on every menu. Gigi's zuppa was so good that we ate it twice, in quick succession, then I came home and did my best to recreate it.

Today being a biting Tuscan-cold type of day seemed like a perfect opportunity to spend a few hours on zuppa duty, especially given that the alternative was yet another hands-and-knees afternoon waxing the newly restored terracotta tiles in the dining room. I couldn't manage the new oil - we buy our 'good' olive oil from the Coop in Clermont l'Herault which produces several varieties, but pressing doesn't take place until December at the earliest - but for the first time (beware - crow alert) I did manage to use a lot of our own vegetables - everything but potatoes, celery and garlic in fact, none of which we grow.

Amazingly, even the tomatoes are ours: we picked them green at the beginning of the month and they're ripening nicely on the windowsill. So, in case you too have a task that you'd like to avoid, here is the (sort of) recipe.

some onions and/or leeks, diced
some green celery, including the leaves, finely chopped
some carrots, chopped into smallish pieces
a few potatoes, ditto
some garlic, minced
some fresh herbs - rosemary, thyme, parsley, basil, that sort of thing - chopped
a couple of peperoncini or small dried red chili peppers, crushed
some cavalo nero (black Tuscan kale) or Savoy cabbage, shredded
some butternut squash or pumpkin or potimarron, peeled and chopped into small-to-medium pieces
a few fresh tomatoes, skinned and chopped
some vegetable stock
some pinto or cannellini beans, cooked
a rind of Parmesan if you have one
some wheat or spelt grains
some good olive oil 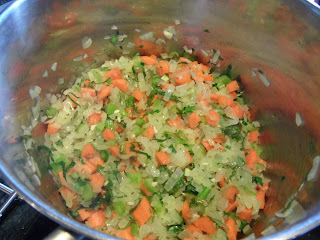 Purée half the beans either with some of their cooking water, or with some vegetable stock, and add them to the pan, with the Parmesan rind too if you have it. Add more vegetable stock to just cover the vegetables, then simmer over the lowest possible heat for an hour. 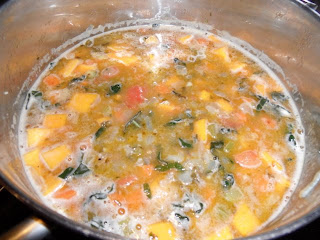 Add the wheat and simmer for another half an hour. At that point, add the rest of the beans and simmer for another 20 minutes or so. Stir in some olive oil and let the whole thing stand for a couple of hours. Reheat gently - it should now be nicely thick - check the seasoning, ladle into bowls and serve with a glug of good olive oil poured over each one. 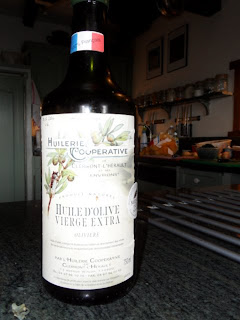 Make at least twice as much as you can eat, because it'll be even better tomorrow .... 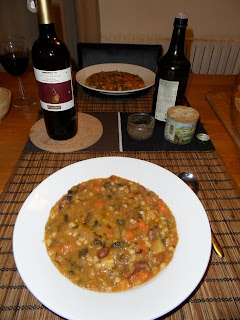 Mmmmmm... So what time is supper?

Quite! We had it last night, and already I'm dying to eat it again ....

Still chuckling at the idea of someone flying home with kilos of knickers! Recipe looks fab, thanks for sharing.