After nearly a week of the kind of damp cold that gets into your bones and won't let go, a very pleasant anti-cyclone has decided to hang out with us and the last couple of days (along with the next four or five, if Metéo France are to be believed) have been cloudless, windless and warm. And after two weeks or so of intensive cement therapy (aka tiling two showers and associated floors), this afternoon I decided it was time to leave the house before my gold slipper turned into a dwarf's pumpkin. Or something.

I sometimes think that when we get the kind of weather we're having at the moment - dawn to dusk sun, with shade temperatures of around 19 degrees and sun temperatures approaching 30 - Imbolc time is possibly the splendid-est time of year here at Grillou. The signs of spring seem to me to be almost more unbearably exciting than the arrival of spring-proper: the sudden lengthening of the days; the buds on the forsythia and japonica growing and beginning to burst almost as I watch; the birds taking their first steps towards proper song; the first yellow crocuses appearing from nowhere in the middle of the day and daffodils seemingly growing centimetres in a matter of hours; the first sighting of a Yellow Brimstone butterfly. And there are no leaves on the trees to obscure our view of Mont Valier and the Pyrénéen chain.

This time round Grillou's garden is a bit more open and welcoming than it has been before: three days ago the six maple trees that shaded and obscured the whole of the front of the house and whose dense foliage gave a clear message to 'keep out' , along with one tall ash tree that was beginning to threaten our main power cable, were expertly dispatched by two lovely grimpeurs-elageurs from Moulis. Not only were they lovely, they were also incredibly tidy: they cut all the wood into 50cm lengths, and piled all the branches up ever-so-neatly into - er - piles. Today we started shifting it to a new wood pile where it will season for two years or so before we burn it. 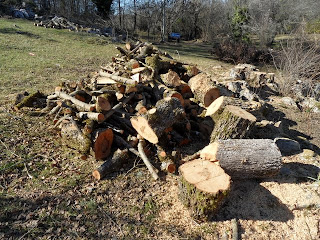 So far we've shifted and stacked some 4 steres (cubic metres), with maybe another 3 or more left to go. And with good hardwood for burning selling at around 60 euros a stere, we're hugely in profit even after paying for the work. In fact looking at the garden and our bits of woodland today and how we might manage it over the years to come, we realised that we're unlikely to have to ever buy in wood. How good is that? 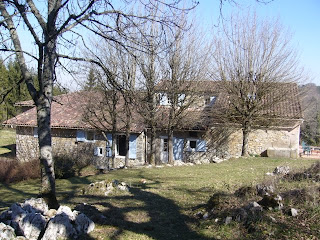 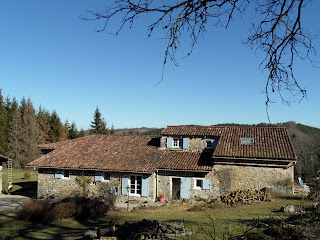 While all this was going on our dog Noodles was nowhere to be seen - unusually, because any garden activity involving both of us is sheer bliss for him, because he can indulge his sheepdog nature by continually rounding us up. We eventually tracked him down outside L'Atelier d'Artiste where he was watching over a male bullfinch that was sitting on the grass, presumably stunned after flying into the (still un-curtained) window: 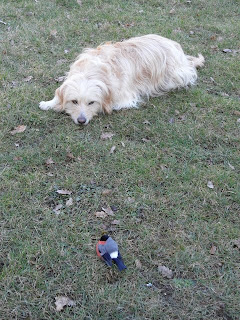 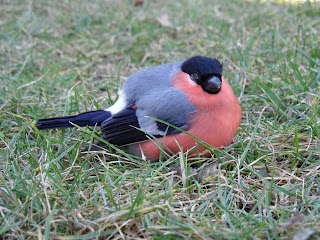 He stayed there, in the same position, for two hours until the bullfinch recovered enough to fly off. I've said it before and I shall no doubt say it again: dogs really are strange and wonderful creatures ...
Posted by Kalba Meadows at 23:36

Kalba, I just awarded you the Stylish Blogger Award. Check out my blog for details.

Well, thank you - that's fantastic. Though I have to say that stylish is not a word I'd use about myself right now!! Watch this space.