No, I haven't been taken to hospital having been run over by a mad monk in pyjamas (as my mother used to say with her cheeks sucked in when yet again I'd failed to make the Sunday evening duty phone call). I am still here. It's just that there don't seem to be enough hours in the day to work'n'eat'n'blog. How do other people do it, I wonder?

I notice that a month ago I was writing about our Indian summer. Well, it's still here. Admittedly the sun took a couple of days off last Friday and Saturday, but otherwise it's been shining from a cloudless sky almost constantly; if it weren't for the shortening days I swear you'd not know it was mid-October. Metéo France tells me that last month we had a total of 227 hours of sunshine, considerably up on the average (although the same thing happened last year too ...) and only two days with no sun at all; this month we've already had well over half our average monthly quotient, with not a single day without sun. We're still eating dinner outside, which is something of a record for mid October .... even the birds are singing: today I heard a blackbird, a blackcap and even a great tit. It's all just much too good to miss, so we've thrown much of the inside work to the winds for a while and removed ourselves lock stock and barrel outside, where we're doing our level (or, in the case of our garden, our non-level) best to catch up with some of the general clearing and cleaning work that we failed to do when we were flat out inside (aaaargh .......).

The focus at the moment is the rocky area in front of the house, which is in effect a natural rockery, albeit long since disappeared under tonnes of ivy and moss. It feels as though I've now spent at least half my life clearing the rocks: it's a long, long task, involving a complicated sequence of clippers, scrapers, wire brushes and plastic brushes, together with a mixture of elbow grease and painstakingly minute work in the endless folds and creases of the rocks (good mindfulness practice!). But it's just sooooo good to be working outside on the earth again, which after all is one of the things we came here for. And we've uncovered rocks we didn't know were there - our own mini-Pyrénées.

This is what we inherited when we moved in over 4 years ago: 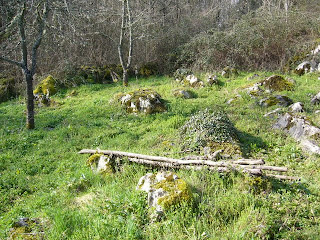 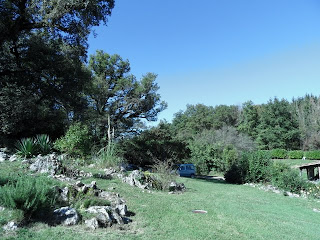 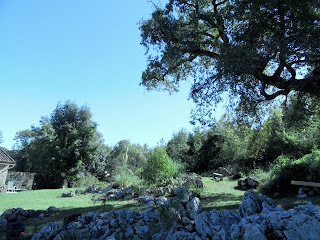 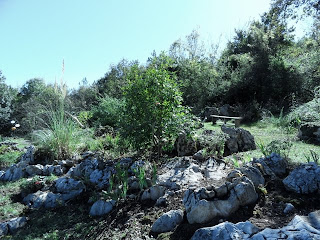 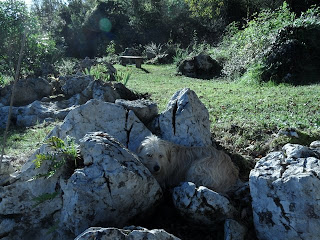 We're not finished yet (actually I'm not sure that 'finished' will ever be a word that can be applied to Grillou ....), but we've sure as hell come a long way. And when we finally get some rain, we can start planting.

The weather's set to continue unchanged until next Monday. Alas, I won't be in it. From Friday till Monday I shall be workshop-ing in London. Do I want to go? No. Much as I enjoy the work, I simply have no appetite for being in the UK. Ah so.

No wonder you have no time to blog! What a lovely transformation.

Thank you! But you of all people put me to shame, you see, because you always seem to find time to blog, whatever else you have going on ...I'm envious.