I'm just staying in and I may be some time

For the last week or so Metéo France has been regaling the best part of France with dire warnings that winter is, at last, arriving - a period of extreme cold, set to last at least 10 days. We, here, are getting off lightly with lows of 'only' around minus 10 degrees Celsius, while the east will shiver at minus 20 (and I can believe it - we once spent January in a remote house high in Haut Beaujolais where we were completely snowed in for over a week in temperatures of minus 25 ....).

This is what I can see out of my study window as I write: 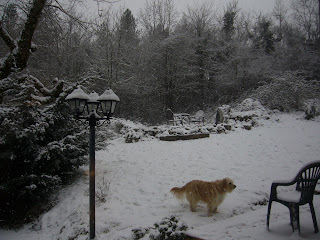 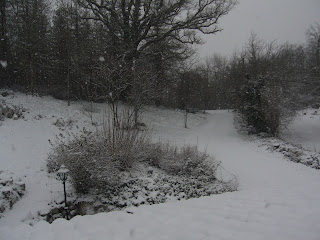 It's still snowing, and the flakes are getting bigger. This is 'proper' snow - light, fluffy and pretty - unlike the wet stuff we had on Sunday. Only thing is, not a single weather forecast so far is admitting that we're having it! Although, amazingly, we will get snow ploughed here if it gets thick, given the extreme low temperatures we're likely to get 'iced in', possibly for some time - there's a steep hill at the end of our track that becomes a skating rink under frozen snow and even our snow chains would be unlikely to grip. Hey ho. All part of the joys of living in this wonderful spot.

Today is La Chandeleur, or Candlemas; in North America it's Groundhog Day. Here in France La Chandeleur is synonymous with the mass eating of pancakes. But it's also, according to legend, a key day in determining what the weather's going to be like for the next 6 weeks.

On this day, the bear wakes up from her winter hibernation and pokes her nose outside her lair; if the sun shines, she turns tail and goes back to sleep for another 6 weeks because she knows that sun at Chandeleur means that the last half of winter is going to be long and hard. If, on the other hand, it's cloudy, she knows that spring will arrive early and that it's safe to come out of hibernation. Similar legends focus on the marmot (hence 'groundhog'), who will only come out of hibernation on 2 February if she can't see her own shadow.

What, I wonder, are they all making of the weather today?