My dog's got Cold Tail!

Yesterday morning, I noticed that Noodles' tail looked a little odd - it was sticking out almost horizontally from his body for a few centimetres, then dropping down limply. And he wasn't wagging it, which is most unusual - he's the waggiest dog who's ever owned me as a pet, with a great line in 'helicopter' wags, generally when he wants something :-) As the day wore on, it became more pronounced, and he became more and more bemused, and more and more depressed, periodically looking round behind him with a disgusted-of-Rimont expression on his face. 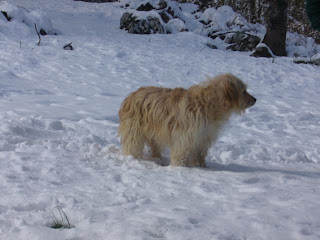 The previous day had been the first day of the thaw, and our 30cm of snow was gradually reducing to the point where he could actually run across the nearby fields instead of disappearing under a pile of the white stuff. On his early evening walk he'd disappeared for almost half an hour, eventually coming back completely exhausted and flopping down into the snow to recover. He does this from time to time, usually when he's got an excess of energy to burn off; he knows the land around here better than we do and generally comes back from a direction entirely different from that in which he set off ... And after two weeks of enforced walk restriction from bitterly cold temperatures and thick snow, he had energy!

I wondered, naturally, whether he'd injured his tail somewhere on his jaunt, although there were no obvious signs of injury elsewhere; in fact I feared that he'd broken it, although he didn't appear to be in any pain. Before packing him off to our local vets though I Googled 'floppy dog tail' ... and lo and behold, found the answer. Noodles was displaying the classic symptoms of Cold Tail, also known as Limber Tail, Broken Wag and Dead Tail. Apparently it's a condition still unknown to many vets, brought on sometimes by vigorous exercise, sometimes by exposure to cold, wet weather, and sometimes by nothing obvious at all (too much tail wagging, maybe?). No treatment necessary - it resolves itself in a few days, with warmth and rest (rest? Huh!). Phew. 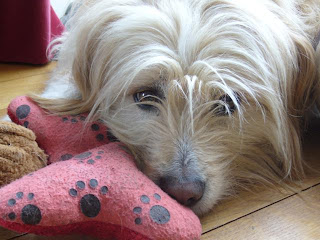 But how pathetic does he look! (He's banned me from taking a picture of his tail ...). The good news is that this afternoon there are already some signs of improvement, and even some miniscule wags. It'll be helicopters again before you know it.

What an adorable pooch! I had no idea such an ailment could occur. What would we do without Google in our lives?
So glad he is "recoptering" - watch out for that rotor!

Yes, Sandee, I do wonder what we used to do without Google ... waste more time, spend more money (or should that be the other way round?). Cold tail ... broken wag ... they almost sound like an April Fool. The boy's doin' good today though - a very decent side to side wag, and psychologically back to normal!

Noodle looks gorgeous - what is he? Sharon

He's mostly Labrit, Sharon (Berger des Pyrénées), but not totally pure bred - his ears are very retriever-like as is his coat colour. We 'inherited' him two years ago from a friend who had to return to the UK and couldn't at that point house a dog; she'd rescued him two years previously when she found him abandoned in her village. I've always had dogs, but this one's a one-off!