I hereby announce that I wish Grillou to secede from its commune, Rimont. Here's why.

Two or three weeks ago, during the heatwave, we began to see a white hound-type dog around a bit. He was timid and wouldn't come near, and we thought he belonged to one of our distant neighbours, a farmer across the valley; just in case he didn't (there are lots of dogs who look a bit like him) we left out food and water, which went.

Last week, the dog came back and started to play with ours. They got on like a house on fire. After a couple of hours, he'd disappear before turning up again the next day. Then on Monday he arrived ... and stayed. Nothing we could do could entice him to leave; he settled down under the big ash tree, where he spent the night. A visit to the farm told us he wasn't their dog, though they had seen him around; talking to other neighbours (I call them that in the loose sense of the word - they're all well over a kilometre away!) told us that he'd been seen around by lots of people.

I started trying to find out who he was. Amazingly, he's tattooed, and the national register told me that his name - and I swear I'm not making this up - was Hobo. This is him: 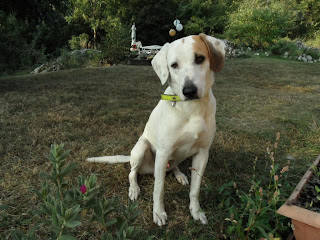 However, being a mere mortal, I was Not Authorised to find out directly who the owner was, so today we went to visit somebody who was - our local vet. And we found out that the person who registered Hobo 2 years ago lives in ... La Réunion. Near Madagascar. Which is - um - in the Indian Ocean. Undeterred, the receptionist phoned the registered owner, who answered, then put the phone down. And that was that.

What the story is heaven only knows. But although he's actually a lovely dog and is very gentil and sociable, (if a little demanding and noisy!) there's no way we can keep him or even find the time to try and rehome him ... especially at the moment when we're busier than we've been since we opened AND I have a full book of my own clients at the same time. So it was with a heavy heart and feeling rotten that after dropping me back home to finish the changeover for tomorrow's new guests, John went to our Mairie (you might call it the town hall, if we were a town - which we're not, but you get the idea) whose responsibility it was to sign the papers allowing Hobo to be admitted to the refuge.

Not our problem, said the Mairie. Go to the Gendarmerie. It's only over the road, so he did. Not our problem, said the Gendarmerie, it's the Mairie's responsibility. Back to the Mairie, who in spite of being required to get involved under both the rural and the administrative codes, refused point blank, even when J pointed out in no uncertain terms (yes, his French has improved!) that we run a business which brings visitors to the commune and which is going to be increasingly difficult to manage given the presence of a chien errant. So, said J, what are your suggestions?

Put the dog in the car, drive him somewhere else, and dump him there, came the response.

Words fail me. I am so angry.

Tomorrow we have more guests arriving, and I still have no idea what we're going to do. But it won't be what the Mairie say.
Posted by Kalba Meadows at 00:21

Kalba,that's despicable but unfortunately not surprising...certainly here animals are way down the priority chain. I once found a very badly injured cat & spent nearly 4 hours trying to get someone to help...long story but I was on my own & couldn't pick it up.Eventually managed to scoop it up into a box & got to the vet (just mins before she closed)& it had to get put down. I was in tears at how much the cat had suffered & no-one seemed to care...hope all works out well for Hobo & that he soon finds a good home.

Yes, you're right - I'd like to say I was surprised but the business of taking care of animals seems to be left to just a few individuals. BTW, Hobo's still here ...;-)

I'm incandescent and I'm not even there. Why can people not accept the responsibility they have as owners. I really hope someone will give him a good home.

I had a feeling you would be, Sharon :) Well, Hobo's still here and getting his feet under the table quite nicely! He's such a lovely dog. I'm not sure he's actually been abandoned - why would someone take the trouble of bringing him all the way here from Réunion then throw him out? So we're still doing our detective bit - and I've been contacted by someone who lives in Réunion who's going to see if she can find out anything about him from the vets in St Leu, where he lived.

One really good thing to come out of this is that I've made contact with some amazing people who do so much work for animal welfare here, which kind of makes up a bit for the shocking official attitude. I have a feeling I may be joining them ....

Well, that's appalling, Kalba. But can't you just take him to the SPA without going via the Mairie? Especially if you tell them why you haven't got the required docs.

Not according to the SPA. Some complicated thing about whether communes pay an adherence fee or not. Ours doesn't, so he'd just have to go the the pound in St G where he'd have a 99.9% chance of being put down after the délai légal.

So decision made, that's a no-no. He'll stay here while we search for his owner or if we can't find one until we can find him a new home.