And then there were two ... 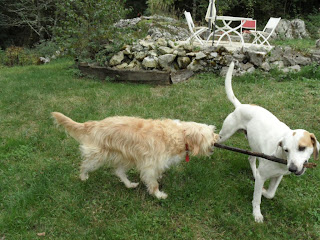 Go on, admit it. You all knew it would happen, didn't you? Meet the new member of the Grillou family, Hobo.

After my last rant on here, I started doing all the things you do here when you find a lost dog: registering Hobo as' found' on the national dog register, asking round at the vets' surgeries, talking to the postman and the local shops, advertising in the local paper, and putting up a listing on chien-perdu.org. And while the first four things did nothing at all, the fifth proved to be amazing.

Within hours of my listing going live, I'd had a phone call from someone who lives in La Réunion and is involved in animal rescue there, offering to try and find out from the local vets what might have happened to his owner. Somebody else from La Réunion contacted me to tell me she was going to go in person to Hobo's registered address to see if she could find out anything. Somebody else offered to phone all the people with the same surname as the owner in Midi-Pyrénées. I met somebody local involved with an animal rescue association outside the vets, who was a great help. And various other people phoned me just to be supportive, one of whom - who lives in the Vosges and is also involved in animal rescue - offered to do some digging and as a last ditch solution to take Hobo for rehoming if no home or owner could be found. It was amazing, and it really opened my eyes to just how open and giving the 'doggie' community is here.

Meanwhile, our guests arrived with a dog of their own - an absolutely gorgeous black cocker spaniel, completely loopy and in her element having two besotted males to boss around! And for a week the three of them had the best of times, though Hobo couldn't quite join in the wild games of the other two and would stand to one side with an expression of "oh - I so wish I could do that" on his face. Noodles, meanwhile, was ecstatic in the company of his doggie friends.

And then a few days later, I had a phone call from someone in the next village. "Can I come round?" she said, "I've just been contacted by someone in the Vosges and I need to talk to you about Hobo". And so she did. Hobo's story is truly extraordinary and very sad, but for various reasons I'm not going to tell it here. Suffice it to say that she and her partner had brought Hobo from a previous 'rescue' home elsewhere in France with the aim of keeping him, but one of their other dogs had other ideas and took against him. Hobo became very stressed out and started to spend each day out wandering; eventually one day he just didn't go home. He had, it seems, been wandering the hills looking for a suitable home for himself, and when he found one - ours - simply stayed.

What do you do when you've been chosen by a dog? And when your own dog seems to be telling you in no uncertain terms they'd like not to be an only dog? Yep. You become a two dog family.

He learns fast from his older brother: 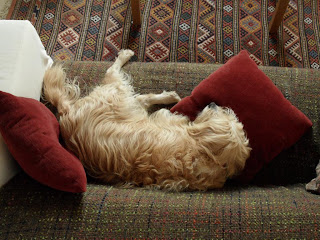 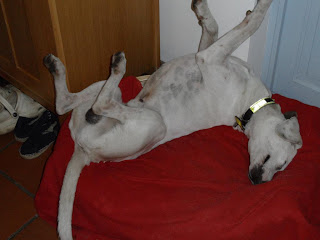 And has the occasional unsavoury habit, like rolling in - um - fumier: 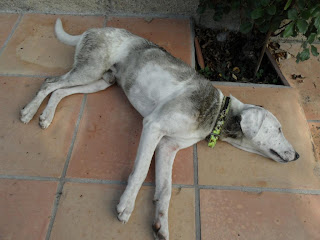 But mostly he's the gentlest, sweetest and most affectionate creature you could imagine: 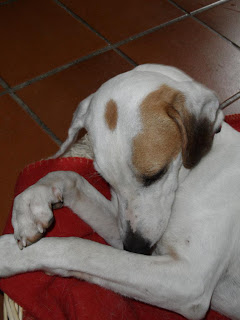 And as the top photo shows, he's learning how to play for the first time. And we're very happy that fate, or whatever it was, brought him Grillou-wards.
Posted by Kalba Meadows at 19:01

Well, congratulations! What a wonderful story with such a happy ending!

It's true - dog choose their owners. It looks like he is truly at home now not at all stressed & I'm sure Noodle will get him to play soon. Mortimer would just love to have another dog to stay on a permanent basis, but I'm still resisting...........