Catalonia has always made the most of the resources offered by the sea. The Mediterranean has given to the Catalans a great variety of marine species, up to 120. The most popular fish are small hake, sardines, John Dory or tuna. Nearly everything is used: heads and skeletons, small and ugly rock fish, crustaceans, ‘not very noble’ molluscs and urchin’s gonads. It can be said that the Catalans are one of the most ichthyophagous peoples in the world.

So says the portal site of the Generalitat de Catalunya, at least. I'm afraid I can't (knowingly) report back to you on the taste of urchin's gonads, but we did eat a lot of fish and seafood, and one of our most memorable afternoons was spent at the llotja - fish auction - in Sant Carles de Rapita. For no really apparent reason this little seaside town had a huge appeal for us - it's not the most obviously picturesque of the fishing villages we spent time at (that distinction goes to L'Ametlla de Mar), but it's one of those places that just seems to feel right.

It's one of the most important fishing ports in Catalonia, and we went for two reasons: to eat a fishy lunch (it's known for its seafood restaurants), and then to watch the landing and auctioning of the day's catch in late afternoon.


My flabber was well and truly glasted by the sheer number of boats and the amount of fish being landed - some 30 tonnes a day, apparently, on 5 days a week, except for May and June, when the fish get a respite. It's mostly sold by auction, though many buyers cluster round the boats as they come in; we were told that a lot of the fish goes to Madrid.


The auction itself is an amazing affair. It's hyper-modern, with all the bidding done electronically; buyers have a hand held gizmo, and as each tray of fish moves through the hall, they bid as the price goes down by pressing the right button. It's a Dutch auction - all about holding one's nerve!


It's a bit like a theatre, and visitors are welcome to observe from the gallery at the top. So we did, spending a long time watching this fascinating process, learning the Catalan names for all sorts of fish and trying to work out how it all functioned. Each tray is photographed as it moves through the line; the details of the contents are flashed up on the screen in red letters and then the bidding starts. It's all over in seconds, then the next tray moves forward and so it continues.

It's easy when you're faced with the sheer volume of all this to start getting het up about overfishing, but the truth is that the vast majority of the catch does indeed seem to be 'small and ugly' fish and 'not very noble' molluscs, all apparently equally prized for the plate here; I certainly had one memorable fish soup which was more than half composed of odd looking things in shells, not one of which I recognised! It's probably the fish equivalent of nose to tail eating - gill to fin eating, would that be?

The sunsets over the Ebro Delta were amazing, and it was always worth braving the mosquitoes to see them: 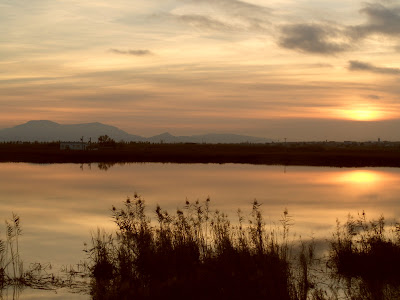 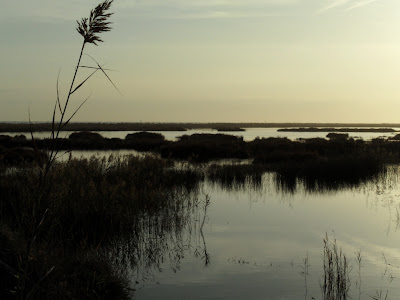 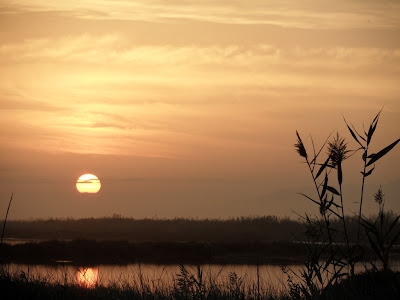 Mozzies? Now you've gone and seriously undersold the area. Can't be doing with mozzies. Just when you'd convinced me to give the area a whirl again :(

Sorry. But you can't have marshes without mozzies. Fact of life, innit?

They don't go much beyond the delta though :)