Unlike the last couple of years, when wall-to-wall sun and warm temperatures in Ariège have lasted pretty much through to November (I swam in Lac Mondély in October last year), Metéo France's prognosis for this autumn is - well, autumnal. So when we spotted a miniature grey-free gap last week, we threw the tent into the car and within an hour were gone, this time towards Banyuls sur Mer in Roussillon for a couple of days coastal walking.

Banyuls is an old wine town just 12 kilometres from the Spanish border, where the last vestiges of the Pyrénées meet the Mediterranean. It has great character, a kind of faded elegance and a very cheap municipal campsite! I'd hate to be there in August, but outside la belle saison it's a charming place - laid back but still very much alive, unlike some of the big purpose built resorts where the shutters go down on the first day of September. People go there to taste and buy wine, to eat fish, to swim and snorkel, to walk the coast path that winds its way in and out and up and down amongst the criques and most of all, it seems, just to stroll around, watching everyone else do the same thing. We did all of those things, and managed to fit in a trip to Cadaqués as well.

Cadaqués was once a small shabbyish fishing village in a setting of spectacular natural beauty on the Costa Brava, close to the Cap de Creus; it was immortalised by Salvador Dalí, who had a house there, and during the 60s and 70s became a remarkable arty-hippy hangout where happenings happened. Until, that is, it got discovered by Barcelona's beautiful people, and Americans, and became chic. Cadaqués is undeniably attractive, but to be honest I found it to be just a teensy bit up itself and I would, I think, have much preferred it in its shabby-but-not-chic days. It's also the only place I've ever been where you're required by municipal decree to pay for parking by the minute (it's 0.03567 euros per minute or part thereof. I'm not kidding). We didn't though, because I'm mean and because I have a fully functioning built-in rip-off detector; instead we found a dingy kind of disused wide alleyway thing that was full of old French cars and the kind of travellers' vans that have tipi poles on the top, so we parked there. For free. And in a back street restaurant that was heaving with local workers and French visitors, we managed to find some affordable salad and sardines, along with a lively debate about the sorry state of the Parti Socialiste with a couple from the Auvergne. So all was not lost.

Being a lover of simple things, though, perhaps the best bit of the trip for me was on Cap Béar, close to Banyuls, watching a Bonelli's Eagle circling and hovering on the air currents for almost an hour - a truly lovely sight. The same night, a storm of mammoth proportions regaled us with almost continuous thunder and lightning for over four hours; in its wake rose the tramontane. The tramontane is the local wind, the Languedoc version of the Mistral, which erupts every so often and gusts at anything up to 90 km an hour, usually for at least four days. It's not pleasant, and is said to drive the locals mad. Which makes daily life, not to mention camping, a constant battle and is one reason why we chose not to live there. So with some sadness (and not a little hilarity, given the manic-ness of the wind) we packed up and came home. 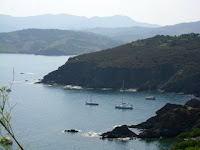 And arrived back here to a different season. There are fallen leaves everywhere, there's snow on Mont Valier and the evenings seem shorter, somehow. Last night we drew the curtains for the first time since March.
Posted by Kalba Meadows at 19:08