We've just spent a couple of days camping and walking in Haut Ariège, on the Plateau de Beille and in the Haute Vallée d'Aston nearby. And very lovely it was too. 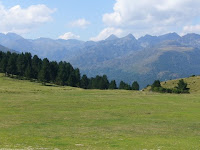 Although it's only just over an hour from home, this part of Ariège is so different from our 'end' that it feels as though you've travelled a lot farther. With a few exceptions, such as the valleys of Vicdessos and Oriège, most of the habitation is centred around the Ariège river, which runs from its source high in the mountains close to Andorra northwards towards Tarascon, Foix and eventually joins the Garonne 164 kilometres later. South of Tarascon, the valley sides are so steep that the houses and farms cluster close to the river; unlike the west of Ariège, where farmhouses and granges dot the slightly more gentle and greener slopes surrounded by large swathes of land, in Haut Ariège people live much closer together. We spent not a little time fruitlessly househunting in this part of the department before it dawned on us that the terrain simply didn't offer the kind of house that we wanted. The N20, the road to Andorra, runs parallel to the river, and - how can I put this? - it ain't quiet. On an average weekend it feels as though all of Toulouse and half of Tarn et Garonne are en route to Andorra to fill up with cheap pastis and cigs. In fact they probably are.

For all that, it's a spectacular area, and once you leave the N20 behind is as silent as you could wish for. The Plateau de Beille is a high altitude plateau, better known for being the Pyrénées' most important cross country skiing area and a frequent stage finish for the Tour de France. Now I'm not a skier, and haven't been one since a memorable school skiing trip during which I entered into the kind of relationship with a T-bar that's really best not described. But the walking is great. You can drive up to the ski station, which means it's one of the few walking areas where you can start walking at an altitude of 1800 metres. We're Slow Walkers, not peak baggers; we’re not interested in how fast we can cover a path, how much height we can gain or how many kilometres we can walk, nor are we up for scary scrambles, precarious footholds or anything that needs crampons. Slow Walking is about taking time to be in and contemplate our surroundings with all our senses; to stand and stare just as often as we want to; and to enjoy the simplicity of walking without the need for challenging goals. So the Plateau is our kind of high altitude walking: no ropes, no vertigo, no scree, but still enough ascent and descent to feel that you've had a decent workout, plus 360 degree views of lots of the big peaks in France, Spain and Andorra. There was one point where we could see both Canigou and Mont Valier, which if you know your Pyrénéan geography you'll realise is quite remarkable.

On the second day we walked in the Haut Valléé d'Aston, where so many flowers were still out that it almost felt like spring. 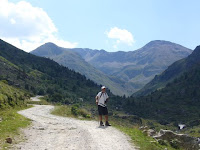 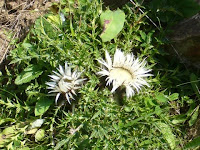 We gathered bilberries and wild raspberries, spent over half an hour watching a golden eagle circling then perching in a tree not far above us, walked through clouds of butterflies, and I spotted my first ever Black Wheatear. 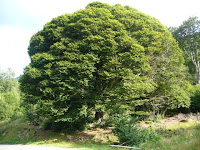 The sun shone, the cow bells on the estives (high summer pastures) rang loud, I came across the most beautiful beech tree, and the river soothed our hot feet. Am I making you envious? Good.
Posted by Kalba Meadows at 18:31