... and yes, there is a goddess. After the tomato tragedy, it's just brilliant to be able to pick our first aubergines; I tried to grow them once in north Norfolk - the plants grew leaves well enough, but when they realised I wanted fruit as well they just laughed at me, and promptly died. 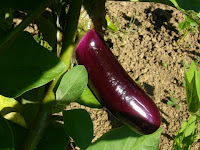 Actually, I have a bit of a love hate relationship with aubergines. When they're well cooked, they're sublime - the very best aubergine dish I ever ate was in Akyaka in south-west Turkey, in a restaurant called The Golden Roof. It was so simple - a version of Imam Bayeldi - but the dish was so full of flavour and melted so gloriously in your mouth that it was quite impossible to eat it with your eyes open. In fact I can quite see why the imam fainted. On the other hand, there can be little more disgusting than an improperly cooked aubergine. I have a friend whose aubergine dishes - in particular her baked aubergine - fill me with dread and an impending sense of doom as they appear onto the table and I realise that once again I'm going to have to munch my way through something that manages to be both slimy and crunchy at the same time. (I suspect that if the imam were eating with us he'd faint again, though this time for wholly other reasons ...).

Anyway, when I've had my fill of grilling my very own aubergines on the plancha, it'll be this aubergine ragù that I'll be making next. In one form or another it was always one of the most popular dishes at our restaurant, converting many an aubergine-sceptic in the process (it's amazing what a no-choice menu can do). Here it is:

For every two people you'll need:

one medium sized aubergine
one onion and 2 cloves of garlic, chopped
a few springs of thyme
a couple of teaspoons each of cumin and fennel seeds
a couple of teaspoons of ground coriander seeds
3 or 4 peperoncini (small red chillies), finely chopped or ground, or better still, some Turkish pepper flakes if you can get hold of them
5 or 6 fresh tomatoes, chopped small (or a tin of chopped tomatoes)
2 teaspoons of tomato purée - sun-dried tomato purée is especially good
a large glass of decent red wine (and another one to drink while you cook!)
a pinch of saffron threads

This is a really easy thing to cook and is invariably delicious, with one proviso - that you don't rush it. You want to extract maximum flavour from every single ingredient, so s-l-o-w is the word. Really push those onions; wait till those aubergines are golden; let the sauce reduce properly. No corner cutting.

Grind the saffron threads in a pestle and mortar and add a little warm water; it will infuse while you prep the rest. Chop the aubergine into smallish dice, coat it in olive oil, then either roast it in a medium hot oven until it's golden (about 15 minutes), or pan fry it. Aubergine soaks up oil like nobody's business, but don't be tempted to keep on adding more - after a little while it will give it all back up again and all will be well. Meanwhile cook the onions, with the thyme leaves, for ten minutes or so in a little olive oil, add the garlic and cook for two or three minutes then turn up the heat and add the spices (not the saffron) and cook for yet another couple of minutes. Add the tomatoes, red wine and tomato purée, boil for a minute or so to burn off the alcohol then let the sauce simmer for an hour, slowly, until it's thickened and reduced by two thirds. Add the aubergine and cook gently for another twenty minutes or more to blend the flavours. Finally, add the saffron infusion and cook for just another two minutes.

The result is an intriguing, Moorish-ish, Turkish-ish blend of eastern and western flavours, though if you don't fancy that you can vary the seasonings however you like. I especially like this with farinata, a divine Ligurian flatbread made with chick pea flour and water and baked at a scarily high temperature; you could serve it with pasta, or rice, or just about anything. And it keeps incredibly well - in fact it's better the next day, and even better the day after that.

Serve it to your right-on veggie friends and they'll kiss your feet. Serve it to dyed in-the-wool carnivores and they won't turn a hair (but for heaven's sake don't tell them their dinner was vegan ...).
Posted by Kalba Meadows at 17:26