Writing is a funny thing: very often a piece has a life of its own and ends up being completely different from the one you (thought you) intended to write in the first place. Take my previous post, for example. I actually set out with the idea of showing a few before and after pictures of The Project So Far, just to reassure you that we do in fact manage to find the odd thing to do to fill our days ... and I ended up talking about Slow Design and quoting Rilke. Ah well. There's process for you.

And here's a bit of The Project So Far:

Part of the salon-as-we-inherited-it, complete with its latex-covered, oil painted walls (I kid you not. But that's nothing. I have a friend whose kitchen walls were covered in lino) ... 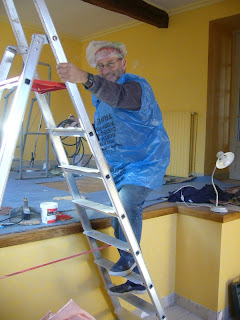 There's a very good reason why John is dressed up in a North Norfolk District Council bin bag. I just can't quite recall now what it is ...

What you don't see here, of course, is the way the plaster fell off the wall every time we tried to paint it; or the horrific mess I made (mainly of myself) when I lightened the wooden staircase from its previous ghastly red colour to light oak. Nor do you get any hint of the seagrass trauma that was to come) ... 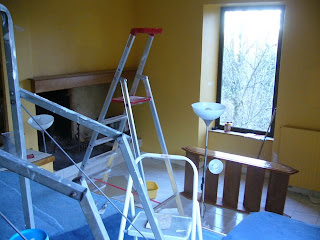 But finally, our salon has now settled into this, complete with wood burning stove that arrived last week, just too late for the really cold weather but just in time to catch the euro-sterling rate at its lowest: 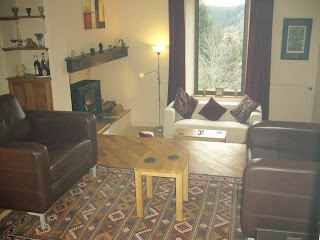 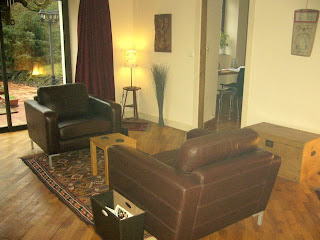 Okay, so it's not always that tidy. Moving swiftly on ... next door (through the opening on the right above), my study/therapy room, previously a bedroom that didn't really have any walls at all, just lengths of silky material stretched on battens over render (when we took it down it was so full of dust that I sneezed for a month ...): 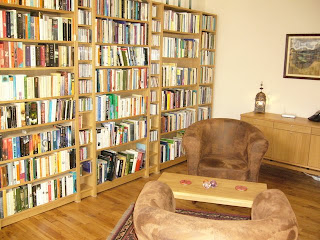 And back the other way, the kitchen, with John trying unsuccessfully to unstick his hand from a cupboard ... 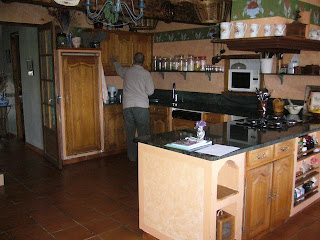 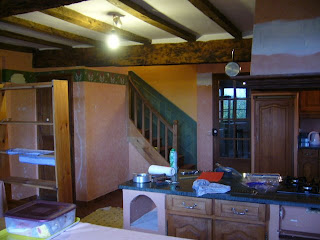 ... under its previous régime. Admittedly you don't get the full effect of twenty-plus years of cooking gunk ingrained into the oak units, nor can you see the breathtaking variety of paint effects, but you can see it was pink. Very pink. Very very pink. After several centuries (no, that's not an exaggeration) of stripping, sanding, more sanding, sealing and seven - yes, seven coats of paint, it now looks like this: 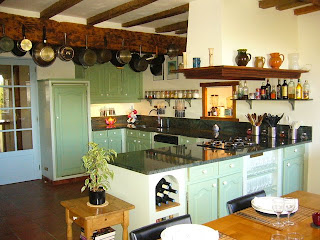 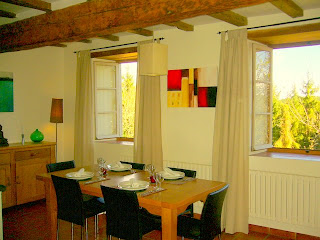 And yes, thank you, I know it would have been easier to strip it out and replace it with an IKEA kitchen. Don't think we didn't contemplate it. But oak is oak, and green is green. And as we all know, it's not easy being green.
Posted by Kalba Meadows at 10:33