So who said Brussels is boring?

We've just spent a few days in Brussels. Don't ask me why; I really haven't a clue what possessed us to go there other than a travel deal so good that even the scary state of our sterling income couldn't entice me to turn it down and the fact that, bizarrely, I've never been there. The day before we set off, I was mournfully scanning the weather forecast for central Belgium and seriously contemplating doing a no-show (although ironically, it was in the event scarcely colder than the Arctic conditions that we're currently experiencing here ...).

Brussels doesn't come with an especially good press, having several times been voted 'the most boring city in Europe', and being popularly regarded as the grey haunt of grey Eurocrats. "You're going where???" shrieked friends, regarding me with that pitious expression reserved for those on the edge of a minor breakdown. But do you know what? Brussels is neither grey, nor boring, and we loved it. Here's why:

It's one of the most multi-cultural, and multi-lingual, cities I've ever been to; you can walk down the street and be surrounded by every European (and a good few non-European) language you can think of. For a language-holic like me that makes it hugely exciting. We had a memorable dinner one night at a south Italian trattoria where I could practise my appalling Italian as that was the lingua franca, and where for a good while we were the only non-Italians in the place; the next night we decamped to the Turkish area near the botanical gardens to eat pide and kefta every bit as good as I've eaten in Mugla.

It has some fabulous Art Nouveau architecture, like the Musée des Instruments de Musique: 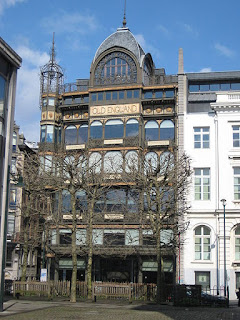 not to mention some superb galleries, like the Musée des Beaux Arts, where we ogled at Brueghel, puzzled at Magritte and discovered that Rubens didn't just paint buxom nudes.

It's great for street wandering, with lots of different quarters with distinctive looks and personalities, and it's small enough to explore on foot. The Sunday morning market by the Gare du Midi must be one of the biggest I've ever seen: part eye-popping vegetable market, part souk, we haggled for spices and ate Moroccan pancakes. And later that day, at the flea market at Place du Jeu de Balle, I found things I've been looking for for centuries, but had to leave them behind because they wouldn't fit in my rucksack ... 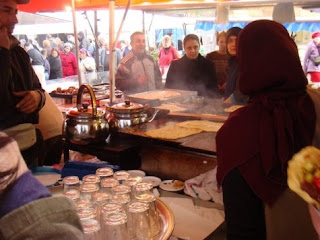 It's real. A bit gritty round the edges; a mish mash of old, new, beautiful, ordinary and (occasionally) jaw-droppingly ugly. Which means you have to work a bit harder, perhaps, than you do in Paris, or Rome. Which makes it all the more interesting.

It has very decent bars and cafés. Cool ones, right-on environment friendly ones, trendy ones, traditional ones, brown ones ... two of our favourites were Au Vieux Bon Temps, which feels as though it hasn't changed since the forties (and probably nor has its clientele ...), and this one, Le Cirio, a bit more well known but with this gorgeous interior: 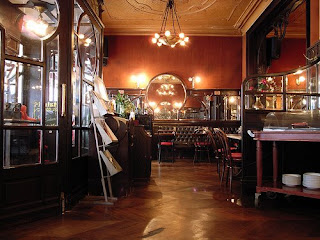 And (of course) it has beer. Nine hundred different ones, apparently, from over 200 breweries. And no, we didn't try them all, although we made a more than valiant attempt. I'm not usually an out-and-out beer lover, but these are different: more like tasting wine. A couple of 9% Trappist beers before dinner is enough to make you very happy indeed.

And it does a mean Christmas market. I'm not a Christmas person, at all - in fact I'm a bit of a bah humbug type - but I'm a sucker for pretty lights, ice rinks, mulled wine and all the trimmings, so long as it's not twee, which this wasn't. The sound and light show at the Grand Place was startling; the view from the top of the Big Wheel over the ice rink and market was straight out of Brueghel. On Sunday afternoon it felt as though the whole of Belgium was there, and we played sardines. 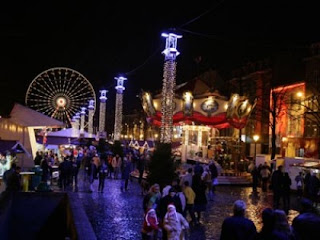 I'm glad we went when we did because it's not beyond the realms of possibility that Belgium as we know it may not survive indefinitely. Tensions between the Flemish and Walloon (French speaking) regions run high with Flemish politicians still looking for independence, and if the results of a poll of French speakers published in Le Point last week are to be believed, a majority of Walloons now wanting to join France. It's a fascinating but complicated story of the relationship between language and culture, which traces its roots back to the 1830s when the Netherlands ruled; the Walloons took to the streets in their own version of revolution, following which a kingdom was set up with French as its official language. It was only in the 1960s, when the heavy industries that had given Wallonia its financial power were in decline but French was still the predominant language of the bourgeoisie, that the country was officially divided into discrete language areas (still current) and Flanders was given more say in the country's politics. Brussels is an aberration: the only officially bi-lingual area in the country, it sits in Dutch speaking Flanders, though it's much more French than Dutch.

From what I can gather from Belgian commentators and blogs, much of the resentment between the two communities is based on stereotyping. The Flemish are frightened of the alleged Walloon contempt for the Dutch; they also fear that their growing prosperity will be dragged down by the poorer economic performance - and the perceived laziness - of the Walloons. "We have had enough of paying for people who are just sucking at the welfare tit. The Flemish have a work ethic, too many Walloons just expect a free ride," was a recent, and sadly typical, comment by a Flemish woman. It feels a bit as if the tension between the two communities is the tension between the Anglo Saxon way and the French way: do you live to work (Anglo Saxon), or do you work to live (French)? Big generalisations, yes. But that's how it is. There are endless stories of an every day language apartheid: a school in Flanders that won't take pupils if they speak French at home; a tennis club that turns away anyone heard to be speaking French. There are no Belgium-wide political parties: only Flemish, French and German (because there's a little known German-speaking community too) ones. A French gite owner once told me, from experience, that the biggest mistake I could make if I got an enquiry from a Flemish guest would be to speak to them in French rather than English - which would almost certainly lose the booking.

I suspect there won't be a happy ending to this one, any more than there is to most relationship breakdowns. Acrimonious divorce looks a bit more likely than mediation.
Posted by Kalba Meadows at 17:26