Tales from the river bank

You may (or there again this may just be my inflated sense of self importance) have noticed that it's been a while since I blogged. Actually, it's been longer than you think, because thanks to the wonders of Blogspot, my blog posts can miraculously appear even when I'm not here. Ta da. But - and are you sitting down? - we've been on holiday.

Neither of us took much persuasion, especially given our builderless status, a fantastic weather forecast and the fact that it was the last week before les grandes vacances, when half of France - the juilletistes - would hit the road (swapping with the other half, the aoûtiens, four weeks later on one of those notorious Saturdays when the autoroutes sweat under 93 kilometre tailbacks). You can only admire a country that has spawned words for people who take their holidays during particular months. There is, though, no word in the French language for people who take their holidays outside la saison, quite simply because nobody really does, except retired camping-caristes, and Belgians. And us.

We decided, as we were throwing the tent into the car (such was the extent of our holiday planning) to head off towards the Aveyron Gorges, an area that made a brief appearance on the list of places we once considered considering living in. After a brief stop in Gaillac, a very pleasant, if rather bourgeois, wine town now inhabited by the previous occupants of Grillou and to which having made a complete cochon of myself at the dessert buffet of our (mercifully un-bourgeois) lunchtime restaurant I may just not be allowed back, we found ourselves pitching the tent right on the banks of the Aveyron, on a wonderful campsite a few minutes walk outside St Antonin Noble Val. 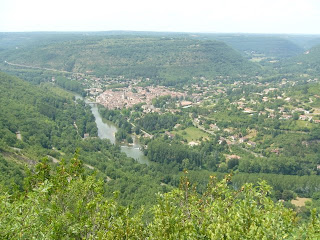 St Antonin was, according to Wikipedia, beseiged and taken by the English in the fourteenth century. No change there then. It's the kind of place that clearly has an expat 'scene', and where the British residents gather in the bars on huge tables after the Sunday market. There is an English estate agent, book shop, holiday home management service; English artisans, artists, craftsmen, marketeers, bar staff ... someone told me that apparently around 30% of the town's occupants are English, and another, smaller, percentage Dutch.

It is an undeniably attractive place: a medieval town that (with the exception of the town hall, which was set upon by Viollet-le-Duc - he of Carcassonne cité fame) hasn't been over-restored and where a good number of buildings are in fact in a fairly ramshackle state, which gives it a feeling of authenticity missing from some of the more 'perfect' towns and villages I've stumbled around in a numbed out stupor before now. But I have to admit that I was slightly put off from spending much time in the town itself by the expatiness of it all - not my scene, not my style.

Instead, we explored some of the smaller villages nearby, like this one, Penne: 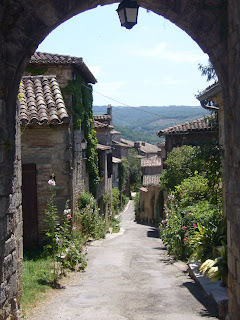 and Caylus, where we stumbled upon this wonderful wolf catcher's house: 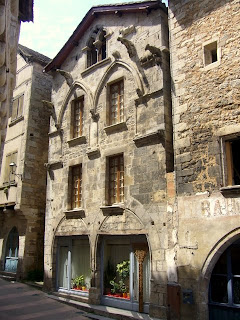 Mostly, though, we spent many hours simply chilling by the river, and I spent many more swimming in it, much to the bemusement of our fellow campers who couldn't see why I would choose to ignore the site's perfectly good swimming pool in favour of something so - well, unsanitised. One day, after a particularly long swim up river and back, I decided to float the last few hundred metres in my customary I'm-pretending-to-be-in-a-flotation-tank position - arms and legs spreadeagled, ears underwater so I can't hear anything - and let the current take me back to my tent. After a while I became aware of a bit of a commotion going on on the bank to my left, and eventually curiosity got the better of me. There was a crowd of nine or ten campers, of a certain age, two of whom were attempting to wade into the water clutching their walking sticks while the others looked anxiously on, clutching each other and their Yorkshire terriers. "Bonjour, m'sieurs dames!" I called gaily as I swam past, none the wiser to what was going on and by now bemused by the tutting and head shaking that was going on behind me. As I clambered out a few metres on, our camping neighbour came over to me and told me that apparently they'd seen me floating down river and had become convinced that I was a noyée - a drowned or drowning person. None of them could swim, but they'd been trying to reach me with long sticks; they had just started to call the pompiers when I miraculously returned from the dead, turned over and swam on. I was not, shall we say, flavour of the month after that. 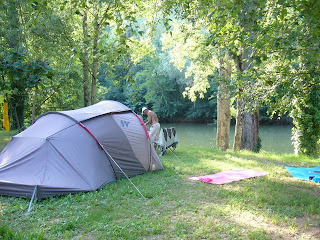 This part of the Aveyron is much loved by canoeists and kayakists, and each day as I was swimming upriver I would encounter not a few of these on their way down, which allowed me to pass my time profitably doing a little research into national traits. The French would always greet me, of course, and even when there were twenty or more of them, each one would bonjour me separately - and expect to be bonjour-ed back, which as you can imagine became a little tedious after a while. Still, at least they didn't expect me to shake hands or kiss them, which would, let's face it, have been difficult. The Dutch would also greet me, rather more earnestly but only once per group, with a spokesperson; they would almost always ask (probably to practise their French) where I was going. The Germans were usually paddling so fast that they only had time to nod briefly. The English? They would look the other way and hope I hadn't seen them.

We had a great time. And then it was good to get back to Ariège and its earthiness, its un-polishedness, its wildness, its greenness, its expansiveness, its simplicity, its people, its particular energy. Beware, if you come here. Ariège, if you 'get' it, is addictive.
Posted by Kalba Meadows at 21:58

Sounds as if you had a wonderful holiday, Kalba - good for you!
Love the Roger Deakin-style free swimming, too.

We did, Phidelm. And yes, I'm an addict of 'wild' swimming - I have an insane fantasy of spending a summer swimming down some of the big rivers in the Midi! Has anyone done it here, I wonder?