The Builders are coming back this week after their summer break (huh!), so we're rushing round like the proverbial mouches bleues trying to prepare (which I guess is a bit like cleaning your house ready for the cleaner to come in, but as I've never had a cleaner, so to speak, I wouldn't know ...). This afternoon, however, we prised ourselves away from our respective tasks - John from wirebrushing beams, me from weighing up and sourcing various heating options - to go and look at some cows.

Yes, I know we've got cows down the track, and very nice ones they are too - Gascon and Limousin, if you want to know. But the annual Foire Agricole at Le Mas d'Azil, 15 minutes away through the cave (yes, really), is a must-do. As its publicity puts it, it's a day where ruralité is put in the forefront - not as folklore, but as real, day to day agricultural life, with its economic and social difficulties as well as its successes. I like that. And it was a good day. Here's some of it, in pictures ... 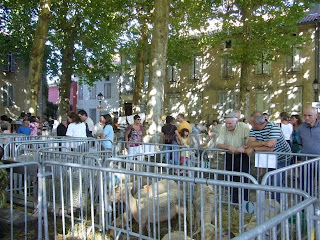 We got cows in profusion: 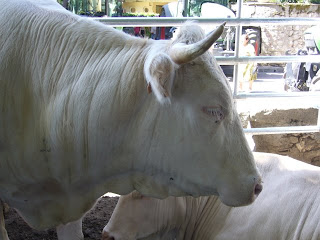 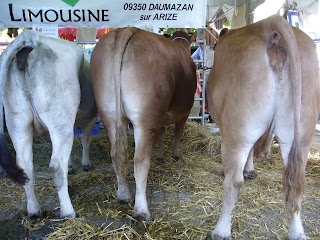 Most of them came complete with panels showing which butcher we'd be able to buy them from when they pass into their next life. One of the things that I like about butchers here is that a lot of them have pictures in their window of the animals they're selling bits of inside. Yes, okay, it's a bit uncomfortable, at least for me; but it's straight, and honest, and it honours the animal that was killed for food. And (beware, soapbox mode coming up) one of the things I bang on about is that those of us who eat meat - even if, like me, it's not every day - need to recognise and accept that real live animals, with pretty faces and melty eyes, are killed for that sole purpose or in the service of it. But it's not for those who want to go on thinking that meat grows on polystyrene trays, perhaps ... 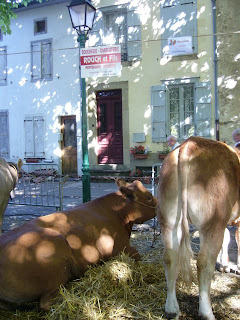 We also got some rather splendid pigs and piglets, for whom the day seemed just that bit too much like hard work ... 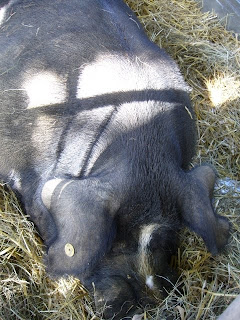 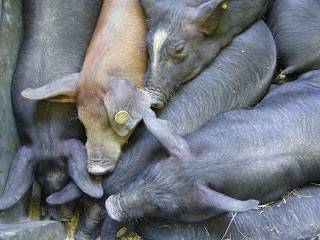 There were sheep and goats and rabbits and turkeys and ducks and geese and chickens and donkeys and horses too, naturally. Not to mention some rather fetching underwear: 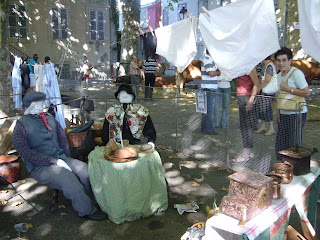 I suspect their owners may have been eating too much of this: 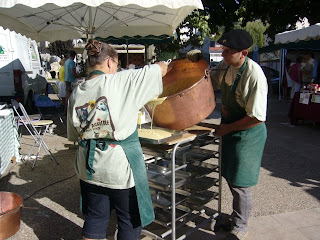 It's millas, a local dessert traditionally served to celebrate the killing of the family pig. It's made from fine corn meal, wheat flour, raw milk, sugar, butter and orange flower water; it's made in a similar way to polenta: cooked, and stirred with a long wooden paddle, for at least an hour, then poured into trays to cool, after which it's cut up into squares and fried in butter until golden. It is, I warn you, more addictive than it looks ...

There was what in England would these days be called a farmers' market (here, it's just a market, because what else would a market be ...). This bread was being baked from scratch in a wood fired oven set up in a van: 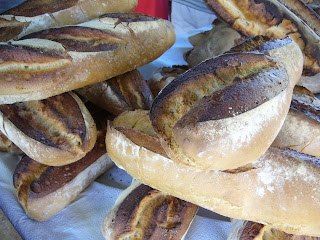 This guy, from the delightfully named village of Camarade - between Grillou and Le Mas d'Azil - makes some of the best Tomme de Vache des Pyrénées: it's really yellow, and like eating new mown grass: 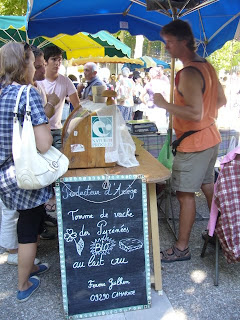 I'm very fond of Le Mas d'Azil. We're there quite a lot: at the Wednesday market, or for a coffee as we're driving through, or occasionally to eat at the pizzeria or the local hotel-restaurant, Le Gardel. It has some lovely squares, shaded by plane trees, and some equally lovely medieval columbage houses, many with gardens running right down to the Arize river, which runs through the middle: 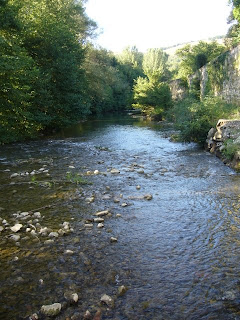 And yet there are still corners of the town (village? I'm never sure) that we're discovering. Today, for instance, we stumbled upon an old house which was actually rather forlorn, but redeemed by this lovely old shutter, with its patina of bleu pastel (woad) and linseed oil: 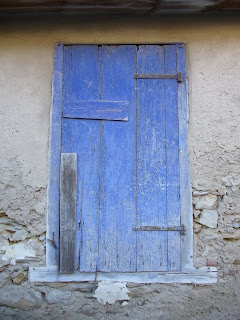 And then, of course, there are the caves, and the dolmens. Another blog, another time ...
Posted by Kalba Meadows at 21:51