It's been so long since I blogged that I feel as if I should be slinking out from behind the sofa, making sure the coast is clear before assuming a guise of innocence, eyes wide open, saying "Me? But I was here all the time ...". Not, you understand, that I'm accustomed to doing that. I'm just trying to make myself feel better about not posting.
I blame this: 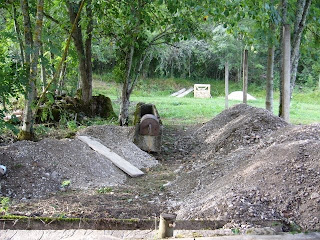 'This' represents about half of the hard core that we've been hacking out over the last two weeks (the rest is behind the camera). Plus ... we've dug out and taken away around 200 huge rocks, and taken to the déchetterie two trailer loads - that's over 50 rubble bags - of self-formed concrete from the area in front of L'Atelier's terrace. I reckon the combined weight of all that to be about 15 tonnes. My back agrees.
However. It's finished. The garden is no longer a landfill site. The land is breathing again; smiling. Soon, we'll add a layer of topsoil and seed it with grass. And the terrace is constructed, framed, stepped and now awaits its filling, just as soon as the mortar in various bits of its construction is properly dry.
In the meantime, what are we doing? Yes, we're preparing to lay Terrace Number Three. The good news is that this time we have a completely flat base to pave - the only flat bit of the entire garden. It used to house an ancient and gross steel swimming pool that we removed - with difficulty - within a couple of weeks of moving in; it was so ugly that the previous owners had planted leylandii to screen it off; we removed those too, of course (nothing, but nothing, merits leylandii, in my book). The bad news is that the rocks and paths that closely surround the area were all but invisible under layers of brambles, ivy, moss, soil, leaf mould and the general toot of decades of neglect. 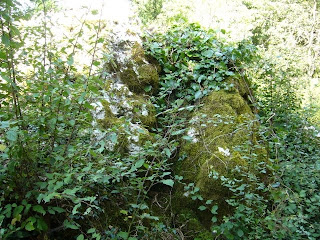 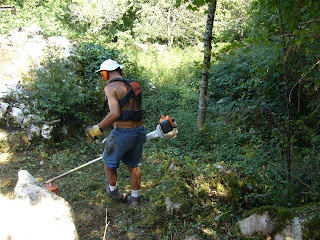 Five days of brushcutting, hacking, cutting, sawing, tugging, scraping and brushing later, rocks have appeared and been cleaned - and so have some steps we didn't know existed ... 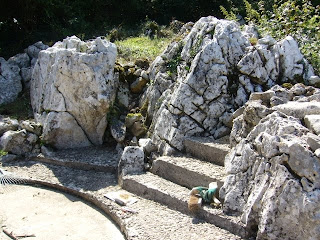 Next on the agenda: laying some warm stone over the concreted area, planting the crevices in the rocks with succulents and other rock plants, and furnishing the whole area with lots and lots of pots of colourful things, tables, chairs and parasols. Et voilà (shameless plug number 694b coming up - look away now if you're likely to be offended): a lovely space for breakfast and lunch, in even winter, and the hub of long, slow dinners in summer. 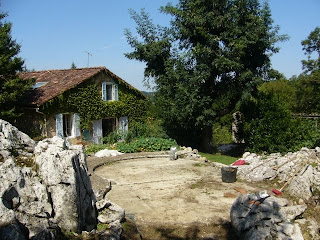 I don't mind admitting that this is proving to be a long, hard summer - physically, for sure, but also mentally and emotionally. It's been hard for us both to see how this land - the land that we both love and which captured us the moment we set foot on it - has been used and abused; sometimes it's just made me want to cry. It's been hard for us both to keep up physically with the energy needed to turn it round, working from very early in the morning through to early evening. And it's been hard to keep finding new solutions to each seemingly insurmountable problem as it's arisen. At times I long to be doing something simple, gentle and creative (hah!).
In the process I've come head-to-head, for the nth time, with all the stuff about non-attachment. The end result of all our labours clearing the land is that it now simply looks as it should. And as much as I might want the entire population of Ariège, France, the world, the universe, to congratulate me for the next ten years on having done such a wonderful job of restoring it (and I do, because I'm just an ordinary, imperfect human being), nobody will, because it all simply looks Right. All the anger, the hurt, the sweat, the angst, the back-breaking graft, the hours spent working and the hours spent working it out, the pride in having done it ... there's nothing for it but to let it go.
One of my favourite Zen stories:

Two monks were travelling together down a muddy road. It was raining heavily. Coming round the bend, they met a beautiful young girl in a silk kimono, unable to cross a stream. The older monk offered to help. He picked her up and carried her across. Several miles down the road, the younger monk could no longer contain himself: "Master," he said "We aren't supposed to associate with women, and yet you actually touched that beautiful woman. You picked her up!" The master said "And I put the woman down on the other side of the stream. Are you still carrying her?"

Just to congratulate you (and John) for the next ten years on having done such a wonderful job of restoration.......
and to thank you for continuing the insightful, thoughtful and always welcome articles that you have posted over the last months/years.

I guess that there are many like me who regularly seek out your blogs, read them, but don't feed back, so I thought it was about time I did.

Awww thank you, JJayne! You've made my day! I'm glad you enjoy reading the blog, and thanks so much for taking time to comment.
Kalba

If I didn't have a sleeping child next to me, who needs waking and feeding, I'd be plundering your blog for more. I love what I've seen so far - and (as more than one Buddhist must have said on their deathbed): 'I'll be back.'

Hi Alex - I'm delighted to see you here! Look forward to hearing more from you.
Kalba