Did the earth move for you this week?

We're having A Proper Summer in Ariège this year: for nearly 2 months now we've had day after day of clear, cloudless blue skies and temperatures hovering up in the thirties, interspersed every so often with the odd thunderstorm and cloudy day or two just so that you appreciate the sun all over again. It's not exceptional, just normal. But after the previous two cool and wet summers, it's come as a welcome relief to everybody: visitors and residents alike are happy, the mood is upbeat, the rentrée is creeping up all too fast. It's not, admittedly, good for laying mortar, which is frustrating as that's what we're supposed to be doing, but hey, there are a hundred and one other jobs to be done and when everything looks as beautiful as this who's to complain? 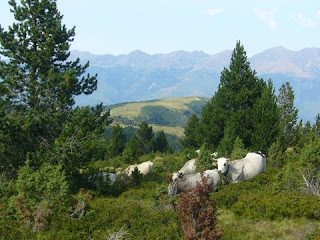 The crystal clear skies this week meant that we had a fantastic view of the Perseids meteor shower. I've been watching these ever since someone introduced me to the show at Dance Camp East many years ago - or rather, I've been trying to watch them. It wasn't easy in England: too much light pollution - even in our small community in north Norfolk, one of the last streetlight-free villages in the country, urbanites on holiday were in the habit of leaving their porch, and even worse, halogen security, lights blazing all night. Grrr. But here at Grillou it's a different story. No street lights (no street!), no houses visible. Nothing. Just pure darkness, and the night sky. 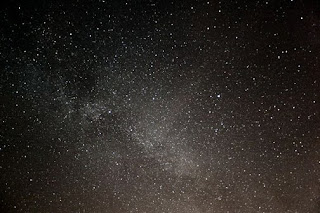 Stretched out in the warm night air on our beach mats, heads resting on pillows, we must have seen a good hundred shooting stars in the hour and a half before the moon rose and brightened the sky. It was stunning. As was the sheer clarity of the sky, and the indescribable number of stars that we could see with the naked eye. Looking through binoculars simply left me speechless, and determined to acquire an astronomical telescope. 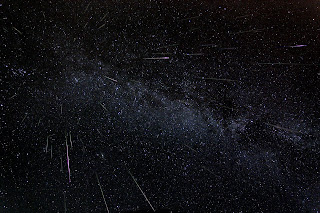 Most amazing of all, though, was that for the first time ever I actually witnessed the turning of the earth. Lying there, relaxed, slightly meditative without trying to be (fatal!), looking up at the spiral arm of the Milky Way, I could see the dense star clusters appearing to move oh-so-slowly across the sky as I watched and as the earth turned. Yes, of course, the same thing happens with the sun every day. But you can't look at the sun; you can't actually see it moving. I could see, and I could feel, the movement, and it was an extraordinary experience. I haven't got words to describe it, because it was the kind of experience that bypasses the mind and speaks to something much deeper, much older. Something that just is.
Posted by Kalba Meadows at 22:02

Greetings! We too have been star gazing this summer. One added surprise has been the viewing of International Space Station. It passed over as the US space shuttle was attached and we actually saw the shuttle lights attached to the station. Quite incredible. You may track the station's orbit at the following site; when it gets close to you, check the times that it will pass over. For us, it was right on time. Enjoy!
http://spaceflight.nasa.gov/realdata/tracking/
Sandee