One of the consequences of spending so much time Being A Builder is that we're fast losing control of the potager. It doesn't take much: I've come to the conclusion that one of Grillou's mottos is "if it can grow, it will": turn your back for five minutes et voilà - ten new ash trees. It's fair to say that we'd never win the village prize for the most orderly vegetable garden, unlike many of those we see around here that have been hoed to within a centimetre of their lives; I rather like weeds, which after all are just plants that happen to be growing in the 'wrong' place, and I seem for some reason this year to have lost the art of sowing in anything approaching a straight line. And anyway, life's too short. But when you need jungle gear and a machete to cut the courgettes (sigh), and you've completely lost your red onions, all the justifications about working organically (which we do) and taking the permaculture approach (which we also do) cease to be convincing. Even to me.

So today's promised afternoon swim at Lac Mondély was deferred in favour of a few hours on the end of a mattock. Not quite as life-enhancing, especially given the afternoon's bizarre and extreme heat. (It's pre-storm heat: we, like half of France, are on a dire storm warning for this evening - flying toads, iron girders falling out of the sky, that sort of thing. Can't come too soon. Candles are at the ready ...). But necessary. 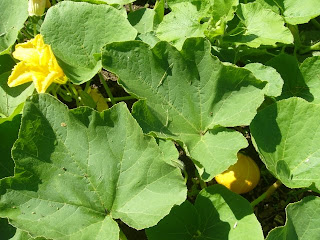 I wouldn't go so far as to say that the plot has been conquered, but I have found earth. And (so far) fifteen potimarrons, five aubergines, another 18 kilos of courgettes (what's the matter with them? Don't they read blogs?), forty or so peppers of various kinds and a few lingering mangetout. Oh, and a row of beetroot I'd quite forgotten about, and - yay! - the red onions.

I also found this little thing: 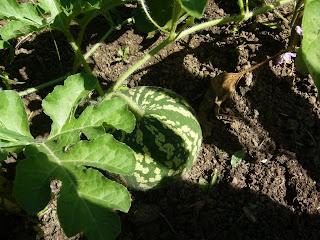 It's a pasteque - a water melon - but a particular variety for jamming (er - that would be making jam, not playing music ...). I'm inordinately proud of it, as it's the first one I've ever grown. I'm hoping it's going to have a mate or two ...

And look at these: 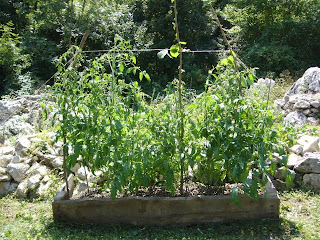 How many plants do you think there are? Nope. Try again. No, lower, lower.

Last year I was so upset by the loss of all our tomato plants to blight that I swore I would never grow them again. But, well, that was then. And so I succumbed to buying five plants. This magnificent pair are Cornue des Andes, an heirloom variety which produces long, pepper shaped fruits. I also have two Green Zebra, and one Cerise. All of them have been planted, on the advice of the local paysans, on raised trenches; inside each trench is a deep layer of fresh nettles, followed by a layer of fumier, then a layer of earth, and finally a 12cm deep mulch of wood shreddings. I have everything - and I mean everything - crossed.
Posted by Kalba Meadows at 19:36