Why did the imam faint?

Once upon a time, an imam married the beautiful daughter of an olive oil merchant, whose dowry contained twelve jugs of the best, richest olive oil. She had a talent for cooking, and prepared many special dishes for her new husband. One night, she cooked a special dish of aubergines cooked in olive oil, and the imam enjoyed it so much that he asked her to cook it every night. For twelve days they feasted on the dish, but on the thirteenth night it didn't appear on the table. "Wife!" said the imam. "Where is the dish you usually cook for me?" "I couldn't make it tonight," said his wife, "because we ran out of olive oil. The imam fainted.
It's a great story, and like all great stories has endless variations. In one, the imam fainted with pleasure when he tasted the dish; in another, he fainted when he realised how costly it was in olive oil. According to a fascinating conversation I came across on LanguageHat, this last would fit with a popular stereotype of village imams, who are often seen as stingy killjoys, as in this wonderful Turkish expression: "You won't get food out of an imam's house, nor tears out of a corpse's eyes".
My own inclination though, having tasted various versions of this dish, is that he did indeed swoon with pleasure. There's a word for it in French, too: se pâmer, which according to Le Robert Micro means 'to faint right away; to be almost paralysed by a strong emotion or sensation'. Hmm. Shall have to find a suitable occasion to try that one out ... But anyway, back to aubergines. Ours have been fruiting for two or three weeks now, but yesterday was the first time they had deigned to produce more than two at the same time. So, demands of the pickaxe notwithstanding, it was time to make the imam faint.
For me, Turkey is right up there as one of the most enticing cuisines in the world, along with Italy and South India. What they all have in common is the ability to draw big flavour from the simplest of ingredients, together with a respect for vegetables as diva in their own right, not just as part of the chorus (are you listening here, France?). One of the most used (and oiliest) cook books on my shelves is Classic Turkish Cooking, by Ghillie Bhasan, who is the only person I know with the ability to make me yearn to eat bulls' testicles. But although she does have an Imam Bayeldi recipe, it's not, exactly, the one I use. I spent years on a quest to replicate the version I ate at a small restaurant in Akyaka, where if you're lucky it will turn up on the counter (no menu here) as one of mamma's specials. This is as close as I can get without actually wearing the headscarf. Here it is: Slow Food in action.
Imam Bayeldi
4 very fresh aubergines, cut in half lengthways
3 large onions, quartered and thinly sliced
8 cloves of garlic, finely chopped
three dessertspoons demerara sugar
5 large tomatoes, chopped
2 tablespoons dried currants
a teaspoon of allspice
sea salt
juice of a lemon
rather a lot of olive oil
This makes enough for four people, or two people for two days. It's really not worth doing less, as it's, frankly, a bit of a faff (but worth it).
Sprinkle the cut side of the aubergine with salt and set aside for half an hour or so to extract any bitter juices. Rinse and dry, make three horizontal cuts in the flesh (don't go through the skin), then drizzle very generously with olive oil and bake in a ceramic baking dish at about 180 degrees Celsius for half an hour.
Meanwhile, prepare the stuffing: fry the onions and garlic in a decent amount of oil, slowly, until they're completely transparent. Add the currants, allspice and a dessertspoon of the sugar and continue to fry until they are just starting to caramelise slightly. At this point, add the tomatoes and another dessertspoon of the sugar, turn the heat up a bit and cook for 10 minutes until all the juices have been released - it should all look a bit soup like at this point. Sprinkle the mixture with a good half teaspoon of salt, and simmer until most of the liquid has evaporated - around 40 minutes, maybe longer depending on the tomatoes, but keep an eye on it - it can burn. It should now look dark and rich. Attempt to avoid eating it all; instead, spoon it onto the aubergines, stuffing as much as you can down into the slits.
Pour over half a cup of water mixed with more olive oil (see?) and the remaining dessertspoon of sugar, cover the dish with foil, then bake for two hours at around 170 degrees Celsius, basting every half an hour or so with the liquid. Remove the foil for the last half hour or so of cooking. Squeeze some lemon juice over it and then let it cool for at least half an hour before eating it (I know, I know, but it is possible, honestly ...). Actually, it's even better the next day ... 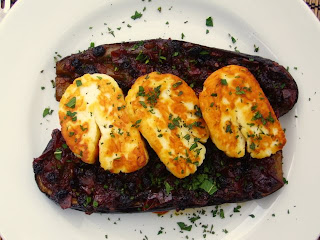 This version would be found more often in eastern Turkey; in the Mediterranean west it would more often be cooked with a mixture of herbs (parsley, basil and dill) instead of the currants and allspice. We ate ours last night with some fried halloumi, courtesy of - wait for it - Lidl in Saint Girons, which also keeps us well supplied with 2 year old Parmesan, prosciutto, feta, stuffed vine leaves, marinated anchovies and all sorts of other odd delights, and a salad of courgette (what else!), mint and our first yellow cherry tomatoes. I'm still standing, but only just.
Posted by Kalba Meadows at 19:18

What a great recipe, Kalba! I love Middle eastern food too, especially for vegetarians. Thanks for the tip on the halloumi. I've got aome aubergines, so that's tonight's supper sorted then!