Saint Girons pushes the bike out

Our local town - or at least what passes for one in this part of the world - is Saint Girons, whose moniker is 'Capital of the Couserans'. When we first visited several years ago we were not, it has to be said, immediately wowed. It was a very hot and thundery afternoon, we'd been travelling for hours, and it was Monday, a day which much of rural France has not yet recognised. We wandered the old town, strolled along the river under the plane trees, admired the pink marble pavements, sat with a long apéro in the Bar de L'Union, and ate well at Le Bouchon. And yet. We moved on the next day as planned with something of a 'yes, but'.

Returning some time later, we began to find out that Saint Girons is a place that, if you give it half a chance, will get its hooks into you slowly. (Which it did, and continues to do, to both of us.) It doesn't have the medieval cuteness of, say, Mirepoix, nor a landmark chateau like that of Foix, or the lovely romanesque art and architecture of Saint Lizier just a couple of kilometres away. It does have some lovely old corners, complete with peeling stucco and ancient shutters, plus some wonderful and unreconstructed shopfronts (as a Francophile friend from England said "It's just so - well, French ..."); it has some surprisingly good shops, once you've found them; it attracts a bunch of more-than-usually interesting people; it has three rivers and views of the mountains. But more than all this, it has atmosphere. 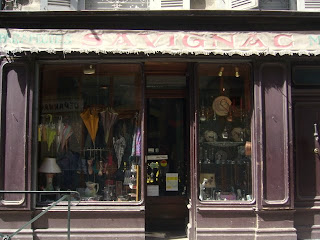 And today it had atmosphere redoubled in trumps, because for the first time it hosted the finish a Tour de France stage finish. The Tour passes through Ariège pretty much every year; last year we watched it at our local col. Saint Girons has previously hosted two stage departures, but never a finish, so it was a Very Big Thing Indeed for our little town. We had, of course, to be there. As I think did everyone from within a hundred kilometre radius ...

It was a gorgeous, sunny, hot, tar-melting day. You couldn't walk a pace in the town centre without falling over a bicycle in some form of other: 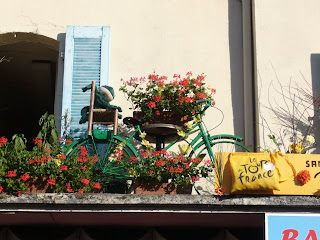 After a Napolitaine and a pichet of rosé under the awning of our favourite pizzeria, we joined the throng making its way to the arrival area. As we crossed the bridge over the river, my jaw dropped: in front of us was the biggest media circus I've ever seen. It must have covered tens of hectares, with TV channels from round the world vying for the title of biggest microphone, most powerful dish, longest broadcasting van, fattest lens, loudest mouth, least tasteful kit. Then there were the team headquarters and vehicles, hospitality tents, sponsors' stalls and all the rest ...
We eventually found ourselves a spot about a hundred metres upstream, as it were, from the finishing line, and within site of one of the big screens so that we could watch the race as it progressed. It was not yet 3pm; we still had over two hours to go, but very soon the crowd was three deep. The temperature rose; we all took turns cooling off in a tiny strip of shade just behind us. We were entertained by a continuous stream of sponsors roller-skating up and down, plying us with their promotional stuff; I'm ashamed to report that we came away with five hats, four coasters, three pom poms, a flag, a bandeau, a rattling balloon and six sachets of washing liquid. Most prized of all, however, were the bottles of Vittel water that fortunately were being distributed in abundance.
The caravane, of course, was as ridiculously kitsch as ever: 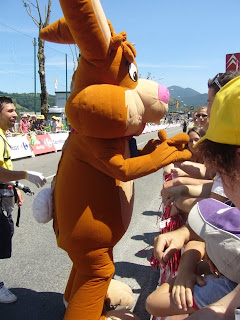 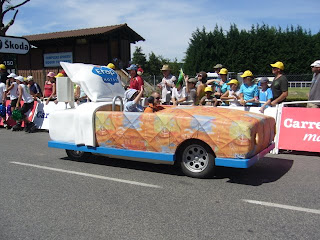 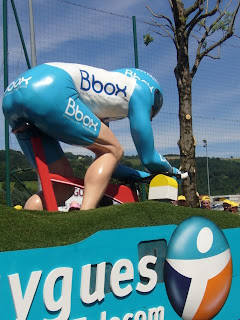 And then we heard, and saw, the helicopters which announced the imminent arrivals of the riders; four riders had broken away from the peloton and it seemed likely that we were in for a sprint finish. We weren't disappointed.

It was almost a French victory but sadly Sandy Casar broke too early and was passed almost in front of our eyes by a Spaniard - all in the blink of an eye. Two minutes later the peloton arrived, and then it was all over. Well, almost. A Basque rider arrived 46 minutes late, to great applause. Then the poor guy was disqualified because the maximum permitted delay is 45 minutes ...
Obviously the official post mortems are yet to come, but it seemed to my amateur eye that our little town acquitted itself rather well, something that although we've only been here for two years makes me feel absurdly proud. The France Télévision broadcast of the race as it made its way through Ariège, seen from the helicopters, was utterly delicious - all rich greens and blues and staggering views - and can have done no harm at all to our department's reputation: if I didn't live here already it would have had me packing my gear into a removal van tomorrow.
But I do live here. And I love it. Can you tell?
Posted by Kalba Meadows at 22:10

Yes, isn't it exciting? Watched them pass through via Monaco, and saw the Ariege footage on telly. Wonderful shots!

Once again, I must thank you from the bottom of my heart for your picturesque descriptions of your life in France. Of course, I hold special thoughts for "our" Lance to do well; but no matter who wins, La Tour de France is always exciting to me.
As always, I look forward to your next posting.