It's that time of year.

Want to cut back the bay tree on the terrace? Can't. Blackbird still nesting in it - her third brood.

Want to clean the gutters? (All right, 'want' might be just a tiny bit of an exaggeration ...) Can't. Blue tit nest in hole just underneath.

Want to put new light up on L'Atelier's terrace? Can't. Black redstart feeding young in nest right next to the door, here: 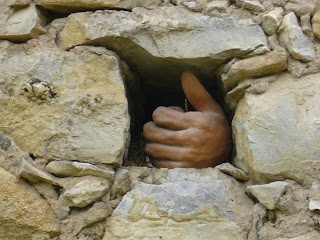 Readers with a photographic memory (pun unintended) might recognise this niche as one rejected by The Most Persistent Wren On The Planet three years ago (oh my god!!!!! Three years!!!!!!!!!!) ....

Not that we're short of things to do. The gardens are in their Forth Bridge mode at the moment: just keeping the grass and the brush and the weeds down takes around 18 hours a week (a horrified friend recently declared that "nothing, but nothing, would induce your thoroughly unpleasant looking timetable on me. Tower block in Toulouse rather than that"). Not only that, but we've embarked on some mega-clearing of previously long-overgrown areas in the rock garden, discovering in the process some long lost natural rockery beds that were probably last tended by the family we've met who lived here in the fifties.

All in all, between that and the day job, there's not a huge amount of time left just at the moment to spend working indoors, though slowly slowly curtains are being hung, light fittings and pictures are going up, furniture is being waxed and polished and patina'd, and by the end of this week (I have everything crossed here. And I mean everything) we should finally have water connected to our guest accommodation. I have a feeling that the first time one of us takes a shower in either of the new shower rooms an awful lot of wine is going to be drunk to celebrate ....


Our latest visitor to the garden arrived this week in the shape of an arctia villica: a Cream Spot Tiger Moth. I first spied him (her?) on the night of the eclipse, sitting placidly on top of the terrace lights watching all the other moths going bananas as usual. I swear s/he had a superior look in his/her eye ... 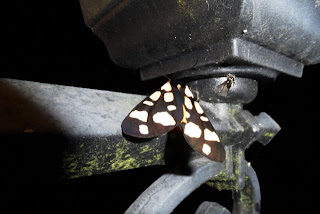 The next day, amazingly it (I give up on gender) was sitting on a blade of grass not very far away; it remained unphased even when I clambered round close by in an ungainly fashion to take pictures. 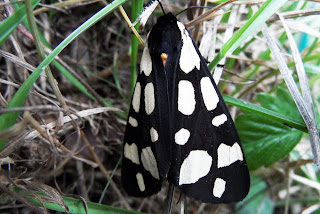 It even tilted itself at an angle so I could photograph its belly. Now how vain is that? 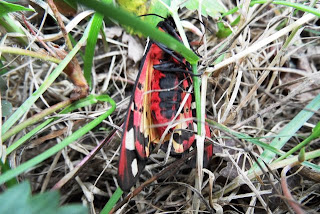 Pretty though.
Posted by Kalba Meadows at 00:34

OK. I'm that 'horrified friend'. And I'm prepared to admit you have things going for you here that the Toulouse tower block couldn't provide. But it seems a bit tough that you have to work so VERY hard to get these rewards. All very Protestant Work Ethic really, but at least the reward is here on earth.

Aaahhh but the thing is, see, that it's not work, let alone P.W.E. Not really. Being out there, surrounded by birds and trees and nature and working on and with the earth and watching things grow ... how can that be work?

There's usually too much sweat running down into my eyes. I love working hard in the garden, but machinery-driven work seems to frighten all those birds away....and I once even strimmed a frog, which was horrible. Let's agree to differ!

Hmmm, think we'll have to. Creative differences and all that. I'll just add (and I can see you shaking your head as I write) that for me the reward is in the process; the product is just an extra free gift. But (as you know) I'm odd like that ...