I've always been a bit of a use-what's-around freak when it comes to vegetable growing: collecting leaf mould from the woods to lighten up our clay soil; schlepping down the hill with a trug and a wheelbarrow to pick up Benjamin-the-donkey's fumier, making benders from hazel and polythene to use as cloches, saving lengths of wood to make plant supports and frames ... and so on. All of which is actually very 'Ariège'; few people here would dream of going out and buying such things when the wherewithal for creating them is all around.

But over the last few years a phenomenon has been appearing in our area. More and more of what I (warning: non-PC language approaching) term the 'old boys' have started using metal spirals to support their tomatoes. And it's spreading like a virus. And this year the old boyiest of them all, he with the beret, huge potager and hand-knitted chicken sheds just outside the village, has installed a couple of dozen of the things too.

A few days ago when I was buying tomato plants (yes, I know we're late. M. Vieuxgarçon already has big green tomatoes on his plants ... but a little thing called a holiday got in the way) I stumbled upon a huge pile of these lethal looking 2 metre high metal spirals. They were only a euro each, which sounded like a bargain (and probably explains why people here buy them ...). So I bought some. Quite whether we'll get better, or more hassle-free, tomatoes because of it only time will tell. But the plants seem to have taken to them and are already wrapping themselves around the spirals like young lovers. 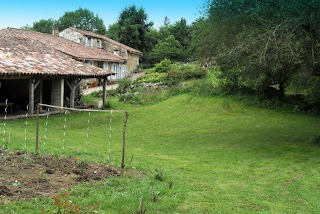 (Yes, I know there's a wooden frame there too. Blame John-the-sceptic).

Since last weekend's cherry marathon we've been dodging the rain to try and get the whole garden area into some kind of order so that we can sit in it without constantly thinking "Aaargh - I should have done that bit" or leaping up and pulling out a ton of weeds in between dinner courses. I'm now at the point where I can stare out of the bathroom window without wincing. Watch this space.

The grapevines we planted three years ago have their first fruit: 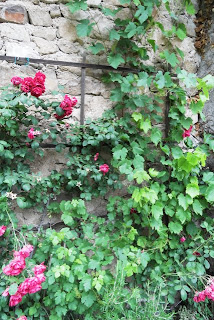 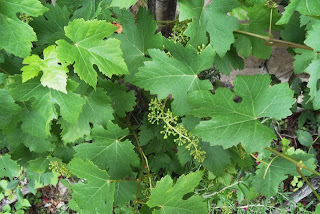 These will take a bit longer though: they went in this year, after the felling of the maple trees gave us a sunny south-west facing wall at the front of the house: 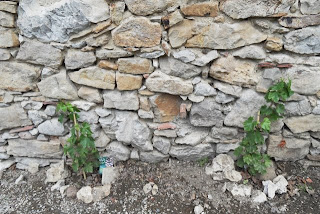 Sorry - another rose  ... but it was so pretty I couldn't resist: 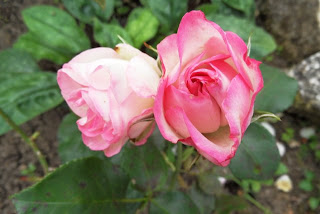 Ah, Kalba, you could have saved yourself those euros and retained your make-do-and-mend credentials. Remember the bamboo I told you was beginning to march unstoppably across our garden? I'm doing a nice line in supplying support-canes for all manner of gardening activity throughout the neighbourhood. That's when I can pause for breath after running down the road with shovel and barrow to retrieve yet another free pile of fumier left on the road...

Ah yes, but have you found a way of creating those lovely regular spirals in your bamboo? That's the point, see? You simply train the stems up and through the spirals et voila - no need for ties or wires. And thanks to the half-metre long spike on the end they're easy to get into the ground.
Must stop. I sound like an advert.